The Case for Retaining Capital Punishment 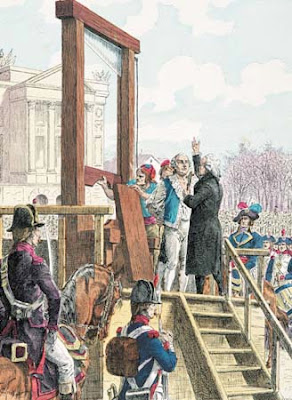 I oppose capital punishment for many reasons but mainly because it doesn't deter capital crimes. That said, I'm beginning to think there might just be an exception or two to total abolition.

I've always thought that maybe, just maybe, an exception should be made for hit men, professional assassins. Lump them in with serial killers, especially those who prey on children. Clifford Olsen, are you hearing me?

Now I'm thinking there might just be another exception - people like the top executives at British oil trader Trafigura for example. These are what I might, for want of a better term, call "greed killers." For the sake of making a several million bucks they're indifferent to the likely consequences to others they prey upon. From The Guardian:

The Guardian can reveal evidence today of a massive cover-up by the British oil trader Trafigura, in one of the worst pollution disasters in recent history.

Internal emails show that Trafigura, which yesterday suddenly announced an offer to pay compensation to 31,000 west African victims, was fully aware that its waste dumped in Ivory Coast was so toxic that it was banned in Europe.

Thousands of west Africans besieged local hospitals in 2006, and a number died, after the dumping of hundreds of tonnes of highly toxic oil waste around the country's capital, Abidjan. Official local autopsy reports on 12 alleged victims appeared to show fatal levels of the poisonous gas hydrogen sulphide, one of the waste's lethal byproducts.

Trafigura has been publicly insisting for three years that its waste was routine and harmless. It claims it was "absolutely not dangerous".

It has until now denied compensation claims, and its lawyers repeatedly threatened anyone worldwide who sought to contradict its version. It launched a libel case against BBC Newsnight, forced an alleged correction from the Times, demanded the Guardian delete articles, and yesterday tried to gag journalists in the Netherlands and Norway with legal threats.

But the dozens of damning internal Trafigura emails which have now come to light reveal how traders were told in advance that their planned chemical operation, a cheap and dirty process called "caustic washing", generated such dangerous wastes that it was widely outlawed in the west.

The documents reveal that the London-based traders hoped to make profits of $7m a time by buying up what they called "bloody cheap" cargoes of sulphur-contaminated Mexican gasoline. They decided to try to process the fuel on board a tanker anchored offshore, creating toxic waste they called "slops".

...The resulting black, stinking, slurry was eventually dumped around landfills in Abidjan, after Trafigura paid an unqualified local man to take it away in tanker trucks at a cheap rate.

Trafigura is throwing millions at the victims in the hope of settling their claims without admitting liability. It argues the autopsy results are unreliable and that lethal hydrogen sulphide in the slops was only there in "potential" form. The company is the world's third largest oil trader and, according to The Guardian, its 200-traders received annual bonuses of up to $1-million last year.

Trafigura's $31-million settlement is a hit, no doubt about that, but it's still little more than a cost of doing business, a risk that didn't pay out as they had hoped. I'm thinking if the people who made these awful decisions, the real pillagers, had a little something on their minds beyond the prospective fortunes to be had, we'd have a lot fewer of these tragedies.
Posted by The Mound of Sound at 8:15 AM