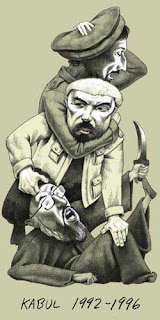 Another sign that Afghanistan may be headed down the road to full-blown civil war. From The Times of London, Times Online:

One of Afghanistan’s most powerful warlords has defended the popular right to protest against the presidential election results, raising fears that the country could be engulfed by violence if supporters of the losing candidates reject the poll as being rigged.

General Atta Mohammad Nur, who broke ranks with the Government to support President Karzai’s main election rival, insisted: “It is the right of our people to defend their votes. Demonstrations, gatherings, strikes and protests against fraud being carried out by the current system are the absolute right of the people.”

...“They are threatening people from whose blood they have gained positions and powers,” General Atta, the Governor of Balkh province in the north, added. “No internal or external power can oppress our free people.”

His comments follow threats from the Interior Ministry to “break the teeth” of anyone who demonstrates.

..."Most people don’t realise how dangerous the situation is,” said an Afghan businessman. “They underestimate the opposition, and most people overestimate the Government’s ability to calm things down.”

The price of Kalashnikovs has almost doubled in recent weeks, prompting speculation that people are rearming in the post-election chaos despite years of international efforts to reduce the number of weapons in circulation.

What to do? Oh I know, let's call Rick Hillier and see if he's got any good ideas!
Posted by The Mound of Sound at 3:36 PM

"Pakistan's President Asif Ali Zardari played down concerns on Wednesday that the Afghan election had been tainted by fraud and said he would be present if President Hamid Karzai is sworn in for a new term."

Meanwhile, anti-Americanism in Pakistan is on the rise.