Hamid Calling. Can We Have a Chat? 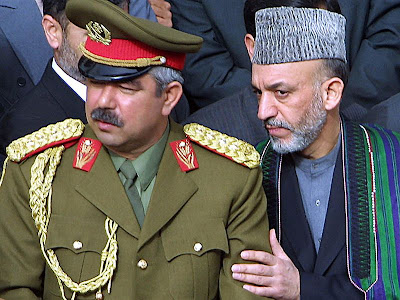 With his election victory well and truly stitched up, Afghan president Hamid Karzai is sending a forceful message to his Western benefactors. Do we have the courage to listen?

For all his faults (he is a warlord after all), Karzai is not stupid. He knew that 'winning' this election would fool no one, Afghan or foreigner. You can't commit electoral fraud on what will have to become known as the "Karzai Scale" without anyone, no everyone, noticing.

Polls that voted 100% for Hamid Karzai, polls that had more than 100% turnout, all watched over by an independent election commission appointed by - well you know, Hamid Karzai. Today's New York Times reports that Karzai's henchmen set up, "...hundreds of fictitious polling sites where no one voted but where hundreds of thousands of ballots were still recorded toward the president’s re-election."

So what exactly is the message that Karzai is sending to us in the West? He could be telling us to go to hell, but I doubt it. The Afghan army is neither strong nor reliable enough to replace Western forces in that country. With a plainly illegitimate government in Kabul the ethnic strains could cause the army to fracture back into tribal militias. No, Karzai still needs the West way too much to order us out.

Maybe Hamid is trying to tell us that his country is simply too far gone for fanciful notions like elections. Perhaps he thought that rigging the election was Afghanistan's best hope for avoiding outright civil war.

In the run-up to the election, Karzai aligned himself with a few truly nasty despots, guys with names like Dostum and Fahim. He even tried to get Hekmatyar to ditch the insurgency and come on board. Karzai was looking for a lot more than simple endorsements from these characters and they were looking for much more in return. Abdul Rashid Dostum (a.k.a. Heavy D or D-Diddy) may not have run in this election but he certainly won nonetheless.

Now imagine these people tossed out onto the street over something as trivial (to them) as electoral fraud? You install Abdullah Abdullah and his loyalists in power. The warlords still control the legislature and Team Karzai goes where? To the insurgency? How clever!

I suspect the rigging of this election was Karzai's way of telling the West that his rival, Abdullah Abdullah, isn't strong enough to govern Afghanistan, to hold the place together and avoid plunging it into all-out civil war.

I'm guessing that Karzai figures we'll have to hold our noses and let this one slide because tossing Karzai and backing Abdullah would be a bit like us putting a torch to the very shack we're currently stuck inside.

It's a hard one to read but I think we'll know when this election is officially over by when Abdullah goes into exile for his own safety. That's the Afghan way.
Posted by The Mound of Sound at 7:44 AM