Don't Blame Hummer Drivers - They're Not Quite Right In The Head 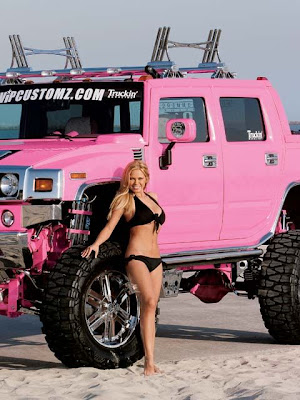 Maybe you like the sight of a Hummer negotiating the supermarket parking lot but probably you don't. To most of us the Hummer personifies the sort of unrestrained overconsumption that afflicts today's world in so many ways.

So what entices a motorist to sport about in this military surplus behemoth? Many, it seems, do it because they're not quite right in the head. A trio of researchers representing the University of Innsbruck, the University of Wisconsin-Madison, and York University set out to find out what's on the minds of Hummer owners.

They investigated various Internet expressions of anti-Hummer sentiment, but they were equally interested in the ways Hummer owners framed themselves as "moral protagonists" in the ongoing debate over consumer values. They conducted in-depth interviews with twenty U.S.-born and raised Hummer owners and found among these consumers an equally strong current of moralism.

"As we studied American Hummer owners and their ideological beliefs, we found that they consider Hummer driving a highly moral consumption choice," write the authors. "For Hummer owners it is possible to claim the moral high ground."

The authors explain that Hummer owners employ the ideology of American foundational myths, such as the "rugged individual," and the "boundless frontier" to construct themselves as moral protagonists. They often believe they represent a bastion again anti-American discourses evoked by their critics.

"Our analysis of the underlying American identity discourses revealed that being under siege by (moral) critics is an historically established feature of being an American," write the authors. "The moralistic critique of their consumption choices readily inspired Hummer owners to adopt the role of the moral protagonist who defends American national ideals."

Their findings shouldn't come as much of a surprise. In a nation that worships gun ownership, it's not a big stretch to see a Hummer as the embodiment of American ideals.
Posted by The Mound of Sound at 9:31 AM

Email ThisBlogThis!Share to TwitterShare to FacebookShare to Pinterest
Labels: Hummer

I drive a small non gas guzzler car and it is interesting how people driving larger vehicles want to treat me on the road including women. They try to cut off, pass very close, take the right-of-way when not in the right and drive very close to my rear bumper when approaching a red light or an exit. I try

to stay well away from them including not hugging behind another vehicle when waiting for the light to turn green. It

doesn't take a person with an I.Q. of 150 to realize these people are actually setting themselves up for a big fall later on in life.

It's pretty sad that so many people are still clinging to this type of consumption. I agree with "anonymous" that they're setting themselves up for some sort of fall. I'm interested to know how these "moral purchases" were paid for: on borrowed credit?

Setting themselves up for a fall. Haven't recent events shown that too has become something of an American tradition?

I share your fear, Anon, particularly as I sometimes find myself going up against these things while riding my motorcycle.

This morning I pulled up to a red light and the big arshed truck behind me thought he was having fun by driving almost into my rear window. I got out of my car and went back and asked him what was his problem? Couldn't he see and I promised I would pull over as soon as I got through the red light and could find a place to do so. Like I said yesterday, these drivers get some kind of jolly from doing this while setting themselves up for a fall. Their brains must be the size of a pea. I know that doing this could lead me into trouble but far to many people get away with this kind of behaviour. Cheers, A. Morris

I fully understand your point A.M. It's a real problem for motorcyclists too - people who draw too near on red lights or, worse, those who let their car/truck/SUV gradually creep forward.

Motorcyclists at least have one usually effective tactic - turn around and give the driver one of those awful, lingering cold stares. Amazing how that gets their attention. Unfortunately that doesn't work when you're in a car.

My computer was attacked by a virus and when i bought it, i missed the drivers, so i needed to looking information by internet. Finally i reached an information that advised me download by the web. i was surprised. I hink all the information cotained in the blogs always result very useful. actually i found a site interesting called costa rica investment opportunities