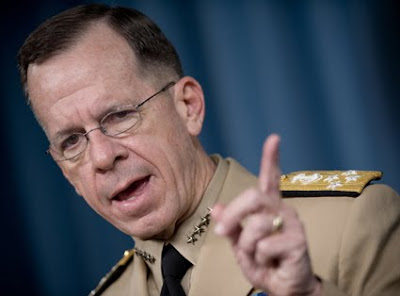 Eight years down a long, bloody road and now the chairman of the US Joint Chiefs of Staff, Admiral Mike Mullen, is beginning to talk about troop increases for the Afghan War as necessary to establish, "a properly resourced counterinsurgency."

Hmmm, Admiral Mike, are you telling America and her NATO allies that the Pentagon has been goofing off ever since it first sent the Taliban packing in 2001? Actually, don't answer that. The question answers itself. The lousy state of Afghanistan today - the growing civil war, the rotten central government, the return of institutional religious fundamentalism, the oppression of Afghan women and children, the predation of the citizenry by corrupt cops and bureaucrats, the resurgence of the Northern Alliance warlords, the flourishing drug trade, the inadequate and unreliable Afghan army, the Taliban's return to Kandahar City and their infiltration of Kabul - answers the question, loud and clear.

Of course the one-track mind of "ol' grampa" hisself, Senator John McCain, was quick to sputter that any delay in sending more combat troops to Vietnam, er Afghanistan, would put American lives at risk. There's no fool like an old fool.

So desperate are the warhawks that they're even resorting to their old bag of tricks, the sleight of hand stuff they picked up in Iraq. The public doesn't have a clue that not one of the core issues that could detonate Iraq into chunks has been resolved, not one. That allows prevaricators like Mullen and his stooge, McCain, to call for the faux victory in Iraq to be repeated in Afghanistan. Oh please, not that!

I'm not sure that Mullen and McCain and their ilk are too stupid to understand the glaring differences between Afghanistan and Iraq. McCain perhaps but not Mullen. Either way there are far more differences than commonalities in the Afghan and the Iraq war. For example, Iraq was successful in establishing a more or less viable, central government within a few years. That's because Iraq, unlike Afghanistan, wasn't born out of the ashes of a civil war. Afghanistan, unlike Iraq, is warlord territory and the power that has devolved to them ensures the central government will never be able to consolidate its hold on the country and that the national army will always be on the brink of fracturing into ethnic militias. Iraq has but two tribes - Arab and Kurd. Afghanistan has Pashtun, Baloch, Uzbek, Hazara, Tajik, Turkmen and a few others. The Afghan people have no recent tradition of secularism unlike the people of Iraq. The Iraqis weren't left to the mercies of drug lords and a narco-economy in the wake of the ouster of Saddam. The list goes on and on and on. It's like comparing an apple and a rock.

What Mullen and McCain won't say is that there will be no successful, viable Afghanistan until the tribalism that spawns the warlord malignancy is overcome, probably through a full-blown civil war and conquest, or that the Pentagon planners aren't even pretending to address this problem. They just want to go back and keep banging away at their increasingly irrelevant and ineffective military war, even as they continuously cede the political war to the steadily growing insurgent/resistance/rebel forces we lump together under the moniker "Taliban."

It's pretty obvious when their very best pitch for more troops presents no plan for ridding the country of the Fahims, Dostums, Hekmatyars, Gul Aghas and the subsequent thugs who will step up to fill their shoes that our military hucksters aren't even serious about winning this thing now, eight years after they began this fiasco. It's about as ridiculous as sending in the troops to prop up the New York and Chicago mob bosses against their rivals in Jersey and Miami.

When, after eight years, the best the Pentagon can come up with is a plea for "a properly resourced counterinsurgency" it's time to read between the lines. That's a thinly disguised admission of abject failure.

For your info, Iraq has three main ethnic communities: the Arabs, the Kurds and the Turkmens.
Other communities in Iraq are: the Chaldo-Assyrians, the Shabaks, the Yezidies, the Sabeans ...

The Turkmens live in the region called TURKMENELI in the north of Iraq, their main cultural centre in Iraq is KERKUK. An important number of Turkmens also live in Baghdad.

Turkmens constitute 12% of the Iraqi population (between 2.5 and 3 million).

Interesting book about the Iraqi Turkmens by a Canadian author Scott Taylor:
Among the 'Others': The Forgotten Turkmen of Iraq

In discussions concerning post-war political representation, it is common to hear specific reference made to Shiite Arabs, Sunni Arabs, and Kurds, while the remaining ethnic groups, the Turkmen, Yazidi, Sabia, Marsh Arabs, etc. are often collectively referred to as the ‘others’.
In fact, many people are surprised to learn about the presence of the indigenous Turkmen population, despite the fact that Turkmen settlements were established over fifteen hundred years ago in Iraq. Furthermore, during the past century the Turkmen have been deliberately repressed by successive Iraqi regimes. Under Saddam Hussein’s drastic Arabification policy, little official mention was ever made of the distinct Turkmen society of northern Iraq.