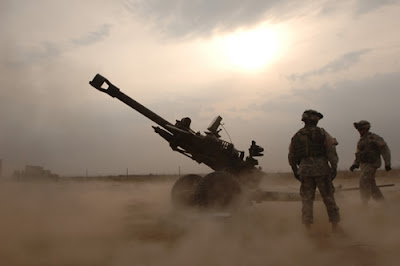 As of yesterday, June 7, the Afghan war entered its 104th month, overtaking the eternity the United States endured waging war in Vietnam. In many minds the war in Afghanistan, the war that counts, is already lost. That's the political war, the war that determines the ultimate success or defeat of the insurgency. The other war, the military war, continues apace but to what conceivable end? Grim as it may be to contemplate, it's common for our war, the military war, to run on inconclusively for years after the decisive war, the political war is determined. That's because we cannot be defeated militarily just as we cannot win a war like Afghanistan militarily. We can, however, keep blasting away for a good, long time after killing becomes irrelevant.


But how to get out of Afghanistan? Last year wasn't a good year to leave, neither is this year. Next year? No, probably not then either. It's the classic trap Western forces encounter, a mental trap. As Vietnam whistle-blower Daniel Elsberg put it back then, "It was always a bad year to get out of Vietnam."
Posted by The Mound of Sound at 1:37 PM

It can hardly be counted as an accurate figure when not taking into account the years Bush diverted war into Iraq and left NATO hanging (particularly Canada).

If you say so

It was time to leave two years ago. Now it's Obamaistanam.

Unfortunately, V, there are forces at play in the greater south Asian region that make it hard to imagine how Obama can extract your country's forces. There's the cherished Pipelinestan project to securely transport Caspian Basin gas beyond the reach of those avaricious Russians. There's the India/Pakistan rivalry. There's the region's mineral wealth. China has already snapped up the rights to Afghanistan's enormous copper reserves. There are the competing interests of Russia, China, the US, India, Pakistan and Iran. There's the Baloch separatist/insurgency in southern Pakistan. It never ends.

America could leave but that would mean sacrificing its presence and its multi-faceted strategic interests in the region.

It's easy to take the AfPak war in isolation but that's deceptive in the extreme. Don't get me wrong, I think the US should cash in its chips or at least hand over its role to Halliburton, KRB and Blackwater. Their personnel already outnumber America's military forces in Afghanistan. Let them work to protect their corporate interests.