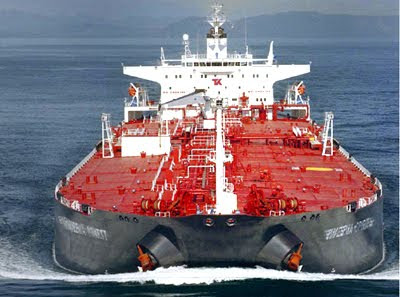 It's the class of oil supertanker that could soon be making regular runs through Vancouver's inner harbour, past the treacherous Second Narrows and into Burrard Inlet to haul the world's filthiest oil to Asia.

Most Canadians, and I'm sure that goes for Ignatieff, have no idea about the shoals and vicious currents that the Second Narrows is known for, at least to locals. But a 120,000 metric ton behemoth with a 32 metre beam behemoth poses no end of risks running the passage beneath the Second Narrows (Ironworkers Memorial) bridge. Ships that big transiting a narrows that challenging are a formula for disaster.

It's not that an Aframax supertanker can't get through on the high slack tide, it can. It's what happens if anything goes wrong - a rudder failure, missing the channel and running aground, hitting the damned bridge (it has happened). A ship that size getting caught in the vicious current of a five metre tide change could be dead meat, ripped apart. The spill from a ruptured, fully loaded Aframax could be several times that of the Exxon Valdez.

The devastation would be enormous. It would likely close Canada's major West Coast seaport. Booms would be useless in those tidal currents. Tourism would be hammered. The Port of Vancouver would see its freight and cruise ship business head to Seattle and other U.S. ports, permanently.

Those who advocate the Burrard Inlet tanker port correctly note that oil tankers have plied that route for 50-years without a single, major incident. True enough. But that was a limited volume of much smaller ships. That experience is meaningless when it comes to a high volume of Aframax tankers running that challenging, even dangerous route.

Here's what Ignatieff has to understand very, very soon. The core of Liberal support in the West lies in the zone that will be imperilled by the Burrard Inlet/Aframax oil route. There aren't a lot of genuinely "safe" Liberal seats in the Lower Mainland and by forcing Tar Sand oil tankers to put this region at risk, he stands to lose an awful lot more votes in those Liberal ridings than he could ever hope to gain, seats the Libs cannot afford to shed.
Posted by The Mound of Sound at 6:52 PM

Email ThisBlogThis!Share to TwitterShare to FacebookShare to Pinterest
Labels: Aframax, BC environment