Is a Military Coup the Only Answer for Afghanistan? 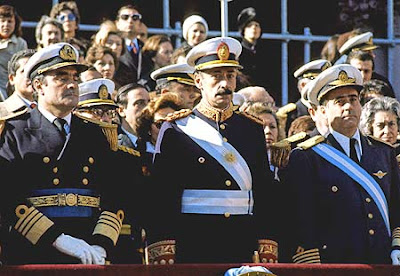 A couple of years back a US Senate foreign affairs committee staffer explained that there has never been a truly successful Muslim government that first didn't overcome the divisive scourges of warlordism and tribalism. Why do we expect Afghanistan to be any different? Does our presence there alter this dynamic? Have we somehow birthed a state that can be a true nation and yet accommodate warlordism and tribalism? Of course not and that's why, nine years later, Afghanistan remains an unresolved civil war on hiatus.

Afghanistan's tribes - Pashtun, Tajik, Uzbek and Hazara plus a few smaller groups - reflect two thousand years of regular conquest and trade through the region. It's why there's such a diverse ethnicity. Some are south Asian, some are Persian, some are Oriental, some are people of the Caucasus, central Asian. They've never really melded into one people. There is no true majority tribe. The Pashtun are merely the largest which is why they have traditionally ruled the place.

Afghans did have a relatively stable country under their former monarch but even their king only ruled thanks to a loosely but heavily devolved power structure. No one, it seems, has ever managed to consolidate power in a central government as that concept is understood in the West. So why, after nine years of treading water, are we still trying to hammer that round peg into that decidedly undersized square hole?

When countries are divided or stratified, trying to forge a cohesive nation is a truly Herculean chore. It can't be done without overcoming the vested interests that sustain the existing dysfunctional system. What first must be created is some sort of genuinely national institution and, in the main, that means a national army.

Decades of experience in South America taught us a lot about military power, the drawbacks and benefits to an emerging nation. Much as we have stereotyped South American military juntas as corrupt, anti-democratic, brutal regimes, they have played an instrumental role in the evolution of democracy throughout that region.

In post-colonial South America power in all forms was stratified. Political, economic, military and social power was held by the landed aristrocracy, the latifundia, who had a powerfully vested interest in keeping the peasantry poor and weak. It was through these aristocracies that the local superpower to the north established its influence. But there was always enough conflict among these nations that each required a viable military.

The military instilled something that an autocracy rejected - meritocracy. The military tended to become the sole vehicle in which a peasant could advance through his country's power structure. A private could become a lieutenant, perhaps a colonel, maybe even a general. Some of those who travelled this path recalled where they had come from, the injustice of birth and realized that military strength was the only force of change. It was a bumpy road but in a continent that worships Simon Bolivar, the overthrow of the post-colonial regimes was probably inevitable.

Afghanistan remains under the corrupt hand of the forces of status quo. If the warlords are to be unseated, if tribalism is to be overcome, it will take a truly national institution more powerful than the collective strength of the warlords. As no such institution exists, either one must be created or we'll have to accept the status quo and consign Afghanistan back to civil war.

To date we have approached the creation of an Afhgan National Army from the context of a force capable of preventing a Taliban takeover of the country. We've been a dismal failure at even that timid goal. McClatchey Newspapers reported yesterday that a recent US government audit of the Afghan forces found there isn't one, not even one, unit of today's Afghan army capable of operating independently of Western forces.

But if a national army, a multi-ethnic meritocracy, is the key to a viable, functional future government for Afghanistan, then it's going to have to be vastly stronger - able to not only take on the Taliban but to suppress that other internal threat to stability, the warlords, and to deter external threats. Just look at the place. Iran on one side, Pakistan at the other. Beyond Pakistan, India. To the north lie Tajikistan, Uzbekistan and the gateway to the Caspian Basin gas fields, Turkmenistan. North of them, China and Russia. To the south the rebellious Pakistani state of Balochistan and the route to the Arabian Sea. Talk about sleeping in a nest of vipers!

What drug-crazed delusion were we under when we convinced ourselves we could drop in for a few years and leave a grateful, happy Afghan people with a viable, secular, democratic central government? Yet, nine years later we're still chasing that mirage only we've lowered our expectations considerably.

Hamid Karzai is a corrupt bastard, rotten to the core, and in league with even more corrupt, brutal and volatile bastards who prop him up - until a better deal next comes along (and it will). Karzai may be a reprobate but he's also a clever realist. He knows the limits of his power and he knows that his allies, domestic and Western are feckless at best, dangerously duplicitous at worst. He lives in a world of treachery in which his power is mainly titular. Yet he also knows that the Talibs are but one force in play that he will have to reckon with. Is it any wonder that, after whoring for India for years, Karzai is now turning to Pakistan as his country's benefactor?

Karzai knows he needs a deal with the Taliban and, as far as the resurgent Talib's are concerned, it's a seller's market. He needs someone to broker the deal, someone powerful enough to deter his Tajik, Uzbek and Hazara rivals from restarting the civil war in the meantime. Karzai doesn't trust us and why should he? So what does that leave? Karzai's default option is Pakistan and he knows it. Pakistan will be open to pretty much any deal that excludes India from Afghanistan. That much Karzai can deliver and we're talking about a guy who doesn't have a lot of chips left on the table.

Is Afghanistan to become Pakistan's proxy, Islamabad's satellite state? Would Russia or China or both back that arrangement? Would a south Asia/central Asia deal mark the end to our own (or at least America's) geo-political interests in the region? We had better figure this out, and soon, for it's apparent that our influence on Afghanistan's future isn't much stronger than Karzai's and may fade out entirely before long.

Like it or not, Afghanistan is in need of a Marshall Plan scale intervention. The focus on that would have to be building a truly national, multi-ethnic, meritocratic Afghan army to be able to fill the power vacuum that would follow dissolving the existing feudal power structure. Afghanistan could not begin to afford that so the question becomes whether the West is willing or able to make the commitment and carry the enormous costs of doing this and, so far, we haven't shown that. Make no mistake, every player in the region has carefully watched our every move in that country since we arrived and there's no fooling them any longer.

Is such an undertaking even worthwhile? Ah, now we get into weighing various geo-political interests. Here we can no longer take the Western forces as an amorphous entity. Canada, for example, really has very little geo-political interest in south Asia. We have not set up a rivallry there between Canada and China or Russia, India or Iran. We simply went to Afghanistan to achieve goals that are no longer attainable. Our raison d'etre ended long ago although we have watered it down to keep the pretence going. The United States and Western Europe, however, have much stronger geo-political agendas, some interests common, some not. Keeping the Caspian Basin fossil fuel resources out of Russian control is a very compelling mutual interest.

Around the world, America's unipolar superpowerdom is being challenged but perhaps nowhere more so than in south and central Asia. Its key rival, China, is immensely resource hungry and intently focused on this resource-rich part of the world. China has already locked up Afghanistan's vast copper field in the north. China would like nothing better than direct access to the Caspian Basin resources as well as a pipeline directly from Iran through the Baloch territory and onward through northern Pakistan.

In short there is ample reason for Washington to take the economic and political gamble of creating a military regime to govern Afghanistan in a pro-Western way. But that is something that must be left to the Americans, perhaps with Western European support. That said, it's by no means clear that the U.S. still has the means or the political will to basically start all over in Afghanistan. The American public is weary of this war and could easily turn on any politician looking to re-ignite the Afghan adventure.

The Iraq and Afghan wars have given rise to an alternative to protracted, large-scale American involvement in Afghanistan. Think Halliburton, think Blackwater. There are already far more "contractors" in Afghanistan than American forces and Blackwater seems able to field mercenary forces large enough to meet the job. Halliburton, meanwhile, is not only skilled at providing non-combat military services but has been after the TAP pipeline franchise back when it was courting the Taliban government. I'll bet the mega-contractors would be far more successful than the inevitably restrained Western forces at building an Afghan army of the sort needed to run that country. We probably wouldn't like the look of it when they were done but it might be the generational price Afghanistan would have to pay to forge a genuine nation.

If we've learned anything from our years in Afghanistan, perhaps it ought to be that the place simply isn't ready for Western-style, secular democracy. Maybe in twenty years, maybe forty, but not now. The array of internal and external forces at play are more than anyone can expect a fledgling government in Kabul to manage. If America wants to stay and play that's fine but it needs a new script.
Posted by The Mound of Sound at 7:15 AM