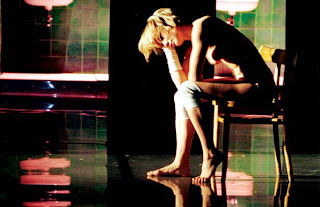 The American people are seriously mentally ill. They're suffering a collective disease of the mind. That's the conclusion of Chris Hedges set out in his article American Psychosis in this month's Adbusters magazine. Here are a few excerpts:

The United States, locked in the kind of twilight disconnect that grips dying empires, is a country entranced by illusions.

...The virtues that sustain a nation-state and build community, from honesty to self-sacrifice to transparency to sharing, are ridiculed each night on television as rubes stupid enough to cling to this antiquated behavior are voted off reality shows.

...Our culture of flagrant self-exaltation, hardwired in the American character, permits the humiliation of all those who oppose us. We believe, after all, that because we have the capacity to wage war we have a right to wage war. Those who lose deserve to be erased. Those who fail, those who are deemed ugly, ignorant or poor, should be belittled and mocked. Human beings are used and discarded like Styrofoam boxes that held junk food. And the numbers of superfluous human beings are swelling the unemployment offices, the prisons and the soup kitchens.

It is the cult of self that is killing the United States. This cult has within it the classic traits of psychopaths: superficial charm, grandiosity and self-importance; a need for constant stimulation; a penchant for lying, deception and manipulation; and the incapacity for remorse or guilt. ...It is the ethic of unfettered capitalism. It is the misguided belief that personal style and personal advancement, mistaken for individualism, are the same as democratic equality. it is the nationwide celebration of image over substance, of illusion over truth.

...We have a right, in the cult of the self, to get whatever we desire. We can do anything, even belittle and destroy those around us, including our friends, to make money, to be happy and to become famous. ...It is this perverted ethic that gave us investment houses like Goldman Sachs...that wilfully trashed the global economy and stole money from tens of millions of small shareholders who had bought stock in these corporations for retirement or college. ...The ethic of Wall Street is the ethic of celebrity. It is fused into one bizarre, perverted belief system and it has banished the possibility of the country returning to a reality-based world or avoiding internal collapse. A society that cannot distinguish reality from illusion dies.

...When a culture lives within an illusion it perpetuates a state of permanent infantilism or childishness. As the gap widens between the illusion and reality, as we suddenly grasp that it is our home being foreclosed or our job that is not coming back, we react like children. We scream and yell for a savior, someone who promises us revenge, moral renewal and new glory. A furious and sustained backlash by a betrayed and angry populace, one unprepared intellectually, emotionally and psychologically for collapse, will sweep aside the Democrats and most of the Republicans and will usher America into a new dark age. It was the economic collapse in Yugoslavia that gave us Slobodan Milosevic. It was the Wiemar Republic that vomited up Adolf Hitler. And it was the breakdown in Tsarist Russia that opened the door for Lenin and the Bolsheviks.

The decline of American empire began ...when we shifted from an "empire of production" to an "empire of consumption." ...We started borrowing to maintain a level of consumption as well as an empire we could no longer afford. ...We substituted the illusion of growth and prosperity for real growth and prosperity. The bill is now due. America's most dangerous enemies are not Islamic radicals but those who sold us the perverted ideology of free-market capitalism and globalization. They have dynamited the very foundations of our society. In the 17th century these speculators would have been hung. Today they run the government and consume billions in taxpayer subsidies.

...even in the face of catastrophe, mass culture continues to assure us that if we close our eyes, if we visualize what we want, if we have faith in ourselves, if we tell God that we believe in miracles, if we tap into our inner strength, if we grasp that we are truly exceptional, if we focus on happiness, our lives will be harmonious and complete. This cultural retreat into illusion, whether peddled by positive psychologists, by Hollywood, or by Christian preachers, is magical thinking. It turns worthless mortgages and debt into wealth. It turns the destruction of our manufacturing base into an opportunity for growth. It turns alienation and anxiety into a cheerful conformity. it turns a nation that wages illegal wars and administers offshore penal colonies where it openly practices torture into the greatest democracy on earth. And it keeps us from fighting back.

...The more we retreat from the culture at large the more room we will have to carve out lives of meaning, the more we will be able to wall off the flood of illusions disseminated by mass culture and the more we will retain sanity in an insane world. The goal will become the ability to endure."
Posted by The Mound of Sound at 1:11 PM

As to "the flood of illusions disseminated by mass culture"

This has to be viewed realistically here in Canada as well. People living their lives oblivious to the very nature of the system itself can only be described as living a life based on illusions.

A Western economic system which depends on over leveraged and over valued mega corporations, and where priority is given to those who never produce anything useful or tangible over those that do, has at best an uncertain future.

I found it rather surprising how many people, both supposedly astute and not so astute, seemed taken completely by surprise when the meltdown hit for real. Like Krugman, I saw it coming two years before it hit.

Unlike Harper, I don't have an economics degree, but I do have real world experience not gained in the bubble of political wanking, or wonking, whichever.

Common sense coupled with experience told me this was coming, and one of the deciding factors for me was that never before in my lifetime had there been such a run up based on such unconventional means. Particularly the interest rate policies and the effect that had on real estate pricing. I knew something was going to bust a cog. Besides that, economics are historically cylical anyway.

So here we sit, keeping the Deer company while they continue to ponder the meaning of those headlights.