Losing the Battle to Hold the Sea at Bay 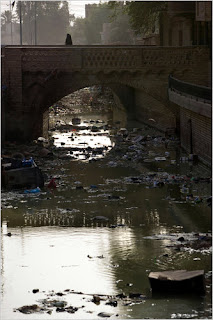 The "Birthplace of Civilization", the "fertile crescent" of Mesopotamia where the Trigris meets the Euphrates is turning into a fetid ditch. Events have conspired to devastate these legendary rivers to the point that the Shatt al Arab can no longer hold back the sea.
Water is a precious resource in this region and, with the onset of global warming, it's in decline. The headwaters of the Tigris and Euphrates lie in Turkey, Syria and Iran. These states have been damming the rivers to safeguard their own supply but this comes at the expense of Iraq. From The New York Times:
The salt water of the gulf now pushes up the Faw peninsula. Last year, for the first time in memory, it extended beyond Basra, Iraq’s biggest port city, and even Qurna, where the two rivers meet. It has ravaged fresh-water fisheries, livestock, crops and groves of date palms that once made the area famous, forcing the migration of tens of thousands of farmers.
In a land of hardship and resignation and deep faith, the disaster along the Shatt al Arab appears to some as the work of a higher power. “We can’t control what God does,” said Rashid Thajil Mutashar, the deputy director of water resources in Basra.
But man has had a hand in the river’s decline. Turkey, Syria and Iran have all harnessed the headwaters that flow into the Tigris and Euphrates and ultimately into the Shatt al Arab, leaving Iraqi officials with little to do but plead for them to release more from their modern networks of dams.
The environment problem became particularly acute last year when Iran cut the flow entirely from the Karun River, which meets the Shatt south of Basra, for 10 months. The flow resumed after the winter rains, but at a fraction of earlier levels.
...In Basra and in the villages that cling to the Iraqi shore of the Shatt, the impact of the disaster has been profound. The fresh waters that once flushed the canals of Basra — the Venice of the Middle East, it was called, though long ago — are fetid and filled with garbage.
The encroaching salt has so polluted supplies of drinking water that the government has scrambled to dig canals from the north that bypass the Shatt — Prime Minister Nuri al-Maliki inaugurated one ahead of this year’s national election — and to truck in fresh water to much of the region. Anyone who can afford it avoids tap water, which is salty enough to leave spots on a glass when it dries.
Mr. Mutashar said that Iraq’s acceptable level of salt in the Shatt’s fresh water was 1,500 parts per million; last year the level reached 12,000.
This isn't the first time these problems have plagued this region. It's believed a similar salination destroyed ancient Mesopotamia. This first civilization developed thanks to intensive agriculture in the fertile crescent. That, in turn, depended on irrigation from the Shatt al Arab. But there was just enough salt in those waters to accumulate in trace amounts in the soil. Over several centuries that salt built up until, in a relatively short span, it reached a tipping point that turned the farmland sterile.
This sort of salination presents an enormous problem and not just for Iraq. As freshwater flows decline and sea levels rise, salination is becoming a genuine threat to Egypt's breadbasket, the Nile delta, as well as parts of Asia, including Bangladesh. And it's not going to get any better in my lifetime or yours.
Posted by The Mound of Sound at 7:59 AM