Only in America, "The Rebirth of a Nation" 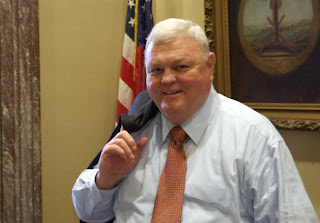 Racism has been restored to its pride of place in today's America with its less than white president. Call it "freedom of speech" I guess but the most vile, rank racism is even found on America's airwaves coming from scum like Republican mouth hero, Rush Limbaugh and others.

In case you missed it, here's one from South Carolina Republican state senator Jake Knotts on his party's leading gubernatorial candidate, Nikki Haley.

Haley was born in India and came to the US as a child. She converted to Methodism, from Sikhism.

There was a time, however brief, when Americans would find the likes of Jake Knotts shameful, even repugnant. At least in America's Cracker south that times seems to have passed.
Posted by The Mound of Sound at 6:58 AM

Email ThisBlogThis!Share to TwitterShare to FacebookShare to Pinterest
Labels: racism

In my estimation racism is the worst disease humans can catch. Worse than AIDS and T.B. More people die as a result of racism than any other disease known to humans. This mental disorder induces murders, riots, wars so on and so forth.

Unfortunately LD, people don't "catch" racism, it's a learned behaviour - something that's taught to them usually by their parents. Once it takes hold, however, it can grow relentlessly and, yes, transform into a disease of the mind.

There is slightly different manner the way people catch the disease but nonetheless infectious. It transmits from parents to children. It is generational. That makes it very dangerous. A cure is badly needed. Public education is one known cure.

MoS, when I say "infectious" I am being sarcastic. If you read my blog then you would know.

All while governments fix it so people have to fight, steal, lie, know someone who knows someone, people will use racism to bolster themselves into positions and keep who they think is beneath them so.