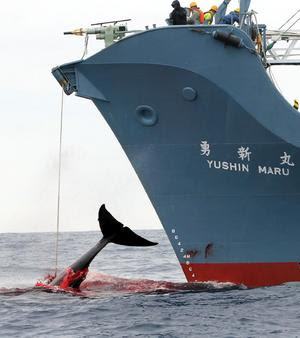 The Sunday Times has unveiled the lengths the Japanese government goes to in order to bribe small countries to help it break the world whaling ban. Everything from aid to cash-stuffed envelopes to hookers come into play:

- They voted with the whalers because of the large amounts of aid from Japan. One said he was not sure if his country had any whales in its territorial waters. Others are landlocked.

— They receive cash payments in envelopes at IWC meetings from Japanese officials who pay their travel and hotel bills.

- One disclosed that call girls were offered when fisheries ministers and civil servants visited Japan for meetings.

The reporters, posing as representatives of a billionaire conservationist, approached officials from pro-whaling countries and offered them an aid package to change their vote.

The governments of St Kitts and Nevis, the Marshall Islands, Kiribati, Grenada, Republic of Guinea and Ivory Coast all entered negotiations to sell their votes in return for aid.

The top fisheries official for Guinea said Japan usually gave his minister a “minimum” of $1,000 a day spending money in cash during IWC and other fisheries meetings.

He said three Japanese organisations were used to channel the payments to his country: the fisheries agency, the aid agency and the Overseas Fisheries Co-operation Foundation.

Isn't it time for the G20 leaders, Harpo included, to put an end to this seedy Japanese farce?
Posted by The Mound of Sound at 11:15 AM

I did some reading on this subject in the past and it really is incomprehensible why a leading country such as Japan clings to such an irrational and archaic practice.

The historical facts on the decimation of whale populations during the times of heavy commercial whaling alone present powerful evidence and proof of why it should not be expanded in any way. It should at least be greatly reduced, if not eliminated.

From what I read, whale meat is not a staple for the average household in Japan, but in fact is more a gourmet item for upper income people. The crux of what I read is that the element who hold the tradition dear do so more out of stubborn pride than anything else. They resent other countries dictating to them on their traditions.