The Case For Ditching Fossil Fuel Our Leaders Struggle to Ignore 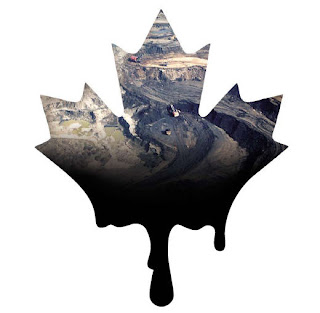 What is most remarkable about Canada's mainstream political parties is their tireless ability to avoid doing anything meaningful about obvious threats to our country. Each does it in its own way. The Conservatives turn their heads. The Conservative-Lites act like a deer caught in the headlights. The Dippers simply whistle past the graveyard. At least that's how they react to the need to decarbonize the Canadian economy and Canadian society. The Conservatives and their political wannabees, the none-too oppositional Loyal Opposition, are in fact avowed Fossil Fuelers or, as TorStar columnist Walkom would politely put it, "on the same page" when it comes to the filthiest energy project on the planet, the Athabasca Tar Sands.

Rather than decoupling from oil, "The Twins" as I'll call them, actually want to lash our future to bitumen. Meanwhile Layton hunkers down in the corner, grinning sheepishly and munching on a stale crust while chanting "no carbon tax, no carbon tax, no carbon tax." This is what passes for leadership in our country and it's damned thin gruel to be sure.

Conventional oil production has a limited capacity. Most additional demand must be met by unconventional sources, which are abundant. But the capacity for production depends on the effective management of environmental, social and technical challenges that unconventional sources pose. The current disaster in the Gulf of Mexico is a clear indicator of how these boundaries are being pushed.

The most significant concern is transport; while there are many other ways to provide heat, light and electricity, liquid transportation fuels would be hard to come by if oil supply dried up.

The International Energy Authority (IEA) predicts that over the next 20 years there will be a steady increase in demand for liquid fuels, most of which will come from China and India. It also predicts that the supply of oil from fields that are currently in production will plummet over the same time frame.

There will be additional sources of oil to help fill this gap – from fields that have been found but not yet exploited, from those yet to be found, and from unconventional sources such as Canada's Tar Sands (though this is costly and particularly damaging from the point of view of climate). There is also the possibility of converting natural gas to liquid fuels. However, even adding all these into the mix, the IEA notes that there will still be a significant shortfall between demand and supply.

King warns of a looming, global oil shortage that will provide great wealth for oil producing nations but at the cost of destabilizing poorer states and damaging the economies of even larger, oil dependent countries. By the way, don't think for a minute that Canada's sitting pretty. Yes Athabasca generates wealth but ask yourself for whom? With Alberta's tragi-comedic royalty rates, that wealth doesn't stay in Canada. When oil hits $130 a barrel, you and I will be in the very same position as anyone from a non-producing country. Sir David says that our societies are going to change whether we like it or not:

To achieve this necessary change, we will need every weapon at our disposal. Improving the energy efficiency of our transportation will be crucial – by reducing air friction, improving engines and running smaller, lighter vehicles. Alternative fuels will also be important, moving from petrol to new generations of biofuels, hydrogen fuel cells and electric vehicles.
But we will also need to go beyond the designs of the vehicles and fuels themselves and look at changing urban design, building and improving mass transportation systems and changing the ways that people drive.

This, of course, is independent of the additional, but pressing imperative to reduce carbon emissions and prevent dangerous climate change. Put the two together and the case for change becomes overwhelming.

Something that King understandably doesn't mention but that I've begun to notice in international commentary lately is a not too subtle and growing hostility or resentment of the oil states. It's part envy for the windfall wealth they enjoy and part anger for the fallout that oil wealth spreads through the poorest parts of the world. The impacts of global warming are already setting in and they're bound to worsen significantly in the next two decades. In what light will that cast the petro-powers with their burgeoning wealth reaped from making the world sick? One thing George w. Bush was right about was that it's an addiction and the oil producers, us in particular, are the environmental meth lab that keeps that addiction fed.
Posted by The Mound of Sound at 6:54 AM