If Harper Got To Choose the Leader of the Opposition 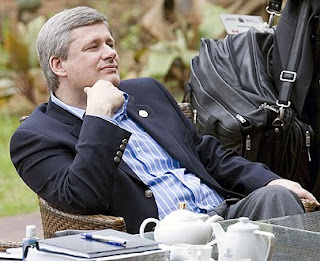 If you were Stephen Harper and somehow you were given the power to select the Leader of the Official Opposition, what sort of person would you look for?

Let's see. Steve's overarching ambition, one that he's never concealed, is to move Canada's political centre to the right. It follows then that you would want someone to lead the opposition to the right in your wake, to carry part of the load of making that shift happen, to help you make your dream come true.

If you can get a guy who'll really steer the opposition to the right, there'll be that much less room for them to criticize your own policies as extreme or contrary to the nation's values. Most of the time you'll both be on the same page. It'll be like having the opposition endorse your policies. Perfect.

If you can get a guy who'll draw the opposition to the right, you'll have your revenge for Stockwell Day. That guy will shred his own party, leave it divided and weakened, easy meat. Most of those who fall away will simply lose heart and reject politics altogether. Perfect. Scars last a really long time.

If you can just get a guy who'll put the helm over to the right you can overcome a lot of the drawbacks of governing as a minority. You can still implement your agenda just as Preston taught you, incrementally. Little changes here, little changes there, maybe stack the Senate - eventually you'll be able to cram all sorts of stuff into a budget bill and get away with it. You can't buy opposition that good.

But why stop there? Surely there are other attributes you want in the leader of the opposition. You want a guy who flinches every time you throw a feint. It never hurts to have an adversary who keeps making himself look like a wimp. And a guy who takes bold policies and then flip-flops as soon as they become tough to defend. That really helps to leave his supporters confused and off balance. Oh yeah, a guy who talks tough to your back and then runs for cover when you turn around. That little dance is never lost on the public. Maybe it's too much to ask but it would help enormously if you could get a guy who couldn't come up with a coherent policy platform that resonated with the voting public.

But this is the stuff of dreams. It's ridiculous. Where would Harper hope to find someone like that?
Posted by The Mound of Sound at 7:30 AM

Iggy was bad news the moment he voted with Harper to extend the mission in Afghanistan.

I have never understood the "Liberals" that have been his cheerleaders.
He is the most ineffectual "leader" I have ever seen and makes you yearn for Dion.

Good one, Mound. When we're still mired up to our quags in Afstan in 2020, Harper's successor, PM Pierre Pollievre, can look back and say the Liberal opposition forced us to stay even though we wanted to get out in 2011.

And Liberals never, never, never ever do any of those horrible things like stacking the senate. Are you joking?

Anon, you're an idiot. How many senators has Harper appointed who aren't Conservative? Answer: zero. How many non Liberals did Chretien and Martin appoint. Answer: several. And, remember. Chretien had majorities. So take that garbage and shove it right up -- well you know where.

When a person like you calls another an idiot you are on a trip of your own. It's not the sign of an educated person to do so but a snipe.