Living With the Tar Sands. You Don't Have a Choice. 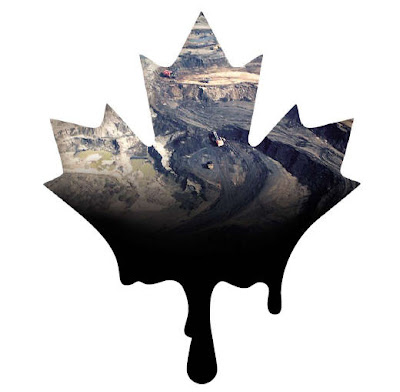 Any hopes of Canada being able to chart its own course through the 21st century are effectively crushed by the Athabasca Tar Sands and the craven nature of Ottawa and Edmonton.

No matter how obvious it becomes that Athabasca is an environmental catastrophe that, for the benefit of the people of the MacKenzie basin, for the benefit of Canada and for the benefit of the world, needs to be shut down completely, that's not going to happen. The reason for that dismal projection is simple - the only people who could shut down Athabasca are the Americans and, when it comes to oil, they're the addicts and Athabasca is their crack pipe. And so, the filthiest fossil fuel project on the planet will continue and grow and grow and grow unless and until the Americans go off the "oil standard." Don't hold your breath.

It wouldn't be quite so bad if Ottawa and Edmonton could deliver on their fairy tale promise of carbon capture & sequestration and remediation of the environmental devastation of the Athabasca region - but they can't and they won't. CCS capture on the scale necessary for the Tar Sands is a farce and the powers that be know it. Besides, who is going to pay for it? The Americans? Not bloody likely. Ottawa? Well we've already heard rumblings of just that from Ignatieff but the political repercussions of that could be even more toxic than the great Athabascan tailing ponds. Athabasca's ersatz crude is the most expensive on the planet and nobody is interested in shouldering the considerable extra expense that CCS (even if it could be made to work) would entail.

Ever wonder why nobody in Alberta or in Ottawa dares tie Tar Sands production and growth to clear CCS and site remediation requirements? And I thought conservatives were all about "user pays." The users - the oil companies - pay up front to sequester the CO2 they generate before it gets pumped into the atmosphere. You can't sequester it after it's slipped away. But that would mean tying operation approvals to the construction of viable CCS systems. The Tar Sanders would actually have to construct their CCS plants and prove them ready and able to fulfil their lofty promises. Put your money where your mouth is, fellas. But the spineless legislative denizens of Wellington St., Ottawa and 97 Avenue, Edmonton haven't got the guts to lower that lumber on the Tar Sanders and, until they do, it ain't gonna happen.

Ignatieff can stupidly follow Harper's lead and proclaim Canada's grand future as an "energy superpower" but don't eat that stuff, Charlie - it's horseshit. Fossil Fuel Super Errand Boy is a much more apt description. Superpowers have clout. We don't have any clout. If we did there'd be a huge CCS operation and site remediation programme already underway in Athabasca. If we don't have enough clout to safeguard our own territory, our own people, then we're anything but a superpower of any description. And the end users? They've already got their fangs and their claws deeply planted in our backs and they have no intention of letting go. With China now muscling in on what Americans have long seen as their preserve it shouldn't be long before Washington moves to cement American dominion over this grimy, slimy patch of the Great White North.
Posted by The Mound of Sound at 7:16 AM

The history of the Tar Sands goes back at least as far as WWI. Alberta was just a territory then and Ottawa had scientists experimenting with bitumen well prior to WWII. Pierre Trudeau was an avid supporter of Athabasca but, at that time, we hardly understood the environmental repercussions of mining and processing bitumen or the global warming/climate change factor.

No, as I said earlier, I don't see any popular uprising in protest against the Tar Sands that would possibly be effective - at least not until it's much too late to make a difference.

Big Oil has the Tar Sands well and truly locked up and control, for practical purposes, has largely passed from government to industry.