How I Learned to Stop Worrying and Love the... Well, You Know 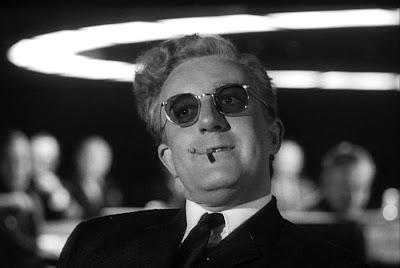 Guess I'm having a Strangelove moment.

Do you ever get the feeling that life has become a routine of standing by, stuck in the mud and watching a succession of unstoppable train wrecks, one by one by one, because no one has the guts to just stop the runaway locomotives?

Look at the rolling stock carnage that's building at our feet - the global meltdown and imminent "double dip" recession/depression; the FUBAR we call Afghanistan; global warming; the rapidly growing, global freshwater crisis; the worldwide collapse of fish stocks; deforestation; the loss of irreplaceable farmland to desertification; overpopulation; nuclear proliferation; resource depletion; air, water and soil contamination; salination of once fertile coastal plains; disease and species migration, the list goes on (it actually does).

And just who is doing what about these things? What Herculean world leaders are coming forward to even mankind's keel? Nobody, that's who. Europe, contrary to the express warnings from the best and the brightest economic minds, is blindly panicking into austerity mode when it ought to be staying with its stimulus/recovery efforts. This European affliction could soon jump the pond to North America and beyond.

Global warming? We're pretty close to certain now that a 2 degree Celsius limit is the key to the survival of our civilization yet we're steering toward a 5 degree or more increase by the end of this century. Around the planet our "Green Revolution" is teetering on collapse, fueled by our wholly unsustainable dependence on limited groundwater stocks. Two out of three of our fellow humans don't even have access to a toilet.

Nuclear proliferation? Smoke'em if you got'em.

A lot of our woes, at least in part, result from the growing power and empowerment of corporatism. Here are the first two entries from this month's Harper's Index:

If 3,000 corporations can wreak $2.2 trillion in environmental damage each and every year and, in fact, must do that to rake in a full third of their profits, then corporatist power is out of control.

But the cast of villains is huge and, in our own ways, we're all sinners. That said, the real villains may be our elected leaders who turn a blind eye to these problems. To them, they're still feasting on the entree and, after all, who even wants to see the bill until after dessert and coffee?

Our leaders have long since stopped working for this country. They're working for themselves, every last one of them. That's why they refuse to expend political capital without an assured return, something that is anything but assured in costly proactive initiatives to prevent problems that won't set in for a decade or two at the soonest. The hens may be coming home to roost right now but why bother if nobody will realize it for another generation?

Just look at the infantile pronouncements of our most intelligent leader, Michael Ignatieff. Everybody, including Iggy, knows that the fate of our civilization depends on decarbonizing our economy and our society and yet he proclaims that the future of our country for the duration of this century is tied to the world's filthiest fossil fuel. There's a guy kicking the political can down the road while pretending he's fit to lead the country.

At this point it's probably best to gaze over this smorgasbord of economic, political, environmental and security calamities and try to guess which of them will become the straw that finally breaks the camel's back. It's bound to be one of them and which one will decide the order in which the others follow. Wait, I know! Why don't we set up a trading desk for something like credit default swaps only we'll call them "calamity swaps" and get Goldman Sachs and the rest of Wall Street to sell us these under-the-table insurance policies. That way, if you can figure out which catastrophes will arrive first, you can cash in and make a bundle, billions even. How cool would that be? After all, would you sooner bet on one or more of these calamities arriving or our political leaders intervening first? I think I'll leave my chips on the red.
Posted by The Mound of Sound at 6:37 AM

Absolutely nailed it. If one was an optimistic sort, it could be called 'ennui'. But it's gone beyond that. There's a helplessness that has enveloped progressives - from the Ignatieff to Obama to the Gulf. The leaders have gone soft and our opposition grows more powerful and entrenched. Capitalism is suffering its strongest rebuke. The world is stuttering in slow motion burnout. And there's nothing we can do.

Yes there is something we can do. Every communinty can get together and we can choose a corporation and not buy any of their products for a month.

“Yes there is something we can do. Every communinty can get together and we can choose a corporation and not buy any of their products for a month.”

I don’t wish to appear facetious but what planet do you live on? I would love to live there.

North America is ruled by corporations. One could argue that the entire planet is ruled by corporations. Democracy in North America is a facade and the proletariat is by and large content with that. One can point at the factors that facilitate the lack of cohesive discontent but there is no way to eliminate them short of total rebellion and total rebellion will never happen. Are you a shrimp fisher in the Gulf? You might be pissed off right now. Who are you going to direct your anger at? If you listen to the MSM you probably will be thinking it’s Obama’s fault because he hasn’t “done enough”. Why are you getting that message? Corporate control of the message. Roughly 30% of the populace cannot think their way out of a paper bag. They only respond. They wouldn’t have needed to hang Joseph Goebbels if looking into the future was possible. He would’ve died laughing.

"total rebellion will never happen" - Theo, I'm not sure at all about that.

True, for now most North Americans are content to let the corporations run the marketplace, because they give us what they tell us we need, i.e., cheap goods and energy so we can all live the "good" life. We see this in the reaction to Obama's moratorium - save the environment sure, but don't take away our cheap oil!

Sooner rather than later, when the costs of raping the resources of the planet comes due, the corporations will raise the price of our "stuff" and only the rich will have much of a life at all.

When the real price of our greed and excessive consumption finally hits home, then maybe we will see a rebellion.