The Afghan National Army - A Square Peg for a Round Hole 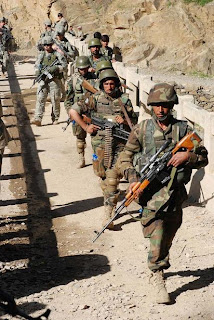 The Taliban are the home team of the Pashtun.   The Northern Alliance represented the other ethnic groups.   There's an enormous amount of bad blood between them from decades of ethnic violence and atrocities.  We haven't begun to sort that out and yet we expect Afghanistan to be able to field a truly "national" army.  According to the Sydney Morning Herald, that's not really working out.

"...in southern Afghanistan, the focus of the US war effort, nearly all the Afghan soldiers are foreigners, too. Few even speak the local language. Despite ethnic quotas and recruiting drives, the Afghan army is still dominated by northern minorities who were oppressed by the Taliban.

Nearly all Taliban are ethnic Pashtuns, the country's biggest ethnic group. Although many Pashtuns are not connected to the Taliban at all, the rift between the northerners and the southern Pashtuns runs deep.


Now this ethnically skewed army is pouring into southern Afghanistan as part of an operation to squeeze the Taliban out of strongholds and win the loyalty of the Afghan people.


...''We can be here in the Pashtun area for 1000 years, but they will never be our friends,'' said Lieutenant Gulagha Haksar, a 30-year-old soldier teamed with US troops in the strategic Arghandab Valley. An ethnic Tajik, Lieutenant Gulagha remembers the killing rampages by the Taliban in his home town in the north-eastern province of Takhar.


...When the Afghans go on patrol in surrounding villages, they are treated as outsiders.


''When they see us, the old men say, 'They are the sons of the British,''' Lieutenant Gulagha said, explaining that villagers equate the US and the Afghan soldiers with the British attempt to colonise Afghanistan in the 19th century.

There you have it.   How is anyone going to make the Afghan National Army work in a country this divided?  It truly is a square peg for a round hole.  Yet this is the very force we're counting on so that we can withdraw from that country.   See anything wrong with that idea?
Posted by The Mound of Sound at 9:05 AM

This is all lies bra, Tajiks are under 25 percent.I have been to Afghanistan, and trust me when I say this, its filled with pashtuns. The pashtuns from the south are uneducated and the army is fitting for them. All doctors, engineers, lawers, archatics etc are majoirty Tajikan Persians.

But Anon, therein lies the problem. The Pashtun are, by far, the largest tribe although not quite a majority. They're also a tribe split in half by the Durand Line that leaves them divided between Afghanistan and Pakistan - sort of like the Balochs.

A Pashtun-dominated army is unacceptable to the Tajiks, Uzbeks and Hazara. They don't want to return to those days which, for them, were pretty oppressive.

Afghanistan really doesn't have a chance. A few years ago a Senate Foreign Relations staffer gave a pretty convincing presentation to the US Senate in which he pointed out that there has never been a stable, modern Muslim state that didn't first overcome warlordism and tribalism. Unfortunately tribalism, that begets warlordism, is enshrined in today's Afghanistan. There's no ridding the country of it.