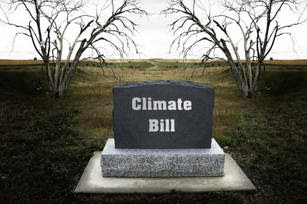 World leaders are scheduled to meet in Cancun in December for another attempt at reaching a global plan to fight climate change.   Unfortunately there's a building consensus that Mexico will be as dismal a failure as Copenhagen was before it.

There's plenty of blame to go around.   Our own Canada is an international pariah on the global warming front.   But the stumbling block is really the United States.   Without strong action on the part of American lawmakers to curb US carbon emissions, the emerging economies, countries that already feel shortchanged, won't budge either.   Right now, America's modest climate change initiative lies dead on the floor of congress.

The New York Times' Paul Krugman puts it down to those signature conservative values - greed and cowardice.

"...why didn’t climate-change legislation get through the Senate? Let’s talk first about what didn’t cause the failure, because there have been many attempts to blame the wrong people.

First of all, we didn’t fail to act because of legitimate doubts about the science. Every piece of valid evidence — long-term temperature averages that smooth out year-to-year fluctuations, Arctic sea ice volume, melting of glaciers, the ratio of record highs to record lows — points to a continuing, and quite possibly accelerating, rise in global temperatures.


Nor is this evidence tainted by scientific misbehavior.

Did reasonable concerns about the economic impact of climate legislation block action? No. It has always been funny, in a gallows humor sort of way, to watch conservatives who laud the limitless power and flexibility of markets turn around and insist that the economy would collapse if we were to put a price on carbon. All serious estimates suggest that we could phase in limits on greenhouse gas emissions with at most a small impact on the economy’s growth rate.

So it wasn’t the science, the scientists, or the economics that killed action on climate change. What was it?


The answer is, the usual suspects: greed and cowardice.


If you want to understand opposition to climate action, follow the money. The economy as a whole wouldn’t be significantly hurt if we put a price on carbon, but certain industries — above all, the coal and oil industries — would. And those industries have mounted a huge disinformation campaign to protect their bottom lines."

But Krugman argues this goes beyond America's "bought and paid for" congress.  The added layer is political cowardice.  Krugman singled out Arizona senator John McCain as perhaps the worst of the climate cowards.

"Alas, Mr. McCain wasn’t alone; and there will be no climate bill. Greed, aided by cowardice, has triumphed. And the whole world will pay the price."


Could it really be as bad as Krugman claims?   Could this be "the year in which all hope of action to limit climate change died?"   Unfortunately, it could.   Finding a workable international framework even with America's full support would have been enormously challenging.    With a hostile and cowardly congress refusing to accept any degree of carbon pricing, it's a deal killer.

Are there ways to coerce the United States?   Probably but only if its main creditors and economic rivals were really ready to play hardball, to make America play the carrot and the stick game.  If enough players told Washington to either come up with solid carbon emissions measures or else risk losing the advantages that come from retaining the US dollar as the international reserve currency, neither congress nor the White House would have much choice but to submit.

What choice does the world have?   American intransigence is leading all of us to the abyss of catastrophic, runaway global warming.  Some of the top climate scientists now argue we have just ten years to abandon coal entirely.   The potential economic consequences of ditching the US dollar as the world's reserve currency, real as they are, still pale compared to the economic consequences of runaway climate change.   There's too much at stake not to put the boot in.

However Krugman's gloomy assessment holds special significance for Canadians.  If the fight against global warming is indeed a lost cause, it's all the more reason for Ottawa to begin focusing on remediation and adaptation initiatives for every region in Canada.   Our political elite, Liberal and Tory, display plenty of their own greed and cowardice, in thrall to the fossil fuel industry.  Neither one of those jackasses wants the government to come clean with you about the climate change impacts you'll have to cope with in the immediate and mid-range future.   They want silence on that front because, once they told you what's coming your way, they might have to explain their unqualified support for the Tar Sands.  So long as we've got Harper or Ignatieff at the controls, the Tar Sands will decide Canada's approach to global warming.   Sad, but oh so true.