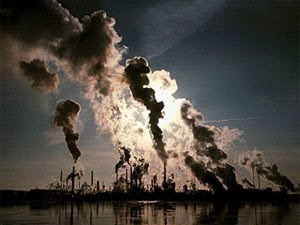 The folks from Sasktachewan and Manitoba don't get too many goodies from the Athabasca Tar Sands and the greenhouse-gas belching upgrader plants down toward Edmonton. One thing they do get, absolutely free of charge, are the airborne emissions in the form of air pollution and acid rain from Alberta's bitumen bounty.

The US Environmental Protection Agency is gearing up to move against this very sort of situation with what it calls the "transport rule" to aid downwind states impacted by the ravages of power plants:

The transport rule uses a section of the Clean Air Act known as the "good neighbor" provision. This addresses the harm from upwind polluters in one state to downwind recipients in another state.

The rule targets power plants whose pollution is transported across the borders of 31 eastern states plus the District of Columbia. It would reduce emissions of sulfur dioxide (SO2) and nitrogen oxides (NOx) to meet state-by-state emission reductions. EPA estimates that by 2014, this rule plus other state and EPA actions will equate to a 71 percent reduction of SO2 and 52 percent reduction of NOx against 2005 levels.

SO2 and NOx are closely linked to ground-level ozone, commonly known as smog. Smog reduces visibility, makes everything look hazy, and is harmful to human health, especially individuals with a history of respiratory problems.

Smog formed from power plants is considered an externality. It is often suffered by those who have no part in producing it. Therefore, the health costs are borne by smog victims rather than smog producers. The cost is external of the power plant's operations. This EPA rule, along with other air quality rules that have come before, seeks to internalize that health cost.

"This rule is designed to cut pollution that spreads hundreds of miles and has enormous negative impacts on millions of Americans," said EPA Administrator Lisa P. Jackson. "We're working to limit pollution at its source, rather than waiting for it to move across the country. The reductions we’re proposing will save billions in health costs, help increase American educational and economic productivity, and -- most importantly -- save lives."

This scribe has argued at length that the bitumen may be Alberta's but the atmosphere into which they pump so many pollutants is definitely not. A strict "good neighbour" law to govern greenhouse gas and other pollutant emissions in Canada on a province by province basis is both entirely justifiable and long overdue. What gives the Oil Patch or Alberta's equally oily politicians the right to think they can reap the bounty of the resource and leave the fallout costs to their victims? Aren't these the people who keep beating us over the head with their laughable claims of moral superiority?
Posted by The Mound of Sound at 8:42 AM

What double standard is this? The US Environmental Protection Agency better take a good look at what the Americans send up the Eastern Seasboard over the Atlantic provinces. That is not to say the Tar Sands don't need to be targeted. However, Americans don't know what is going on from one end of their counry to the other. Is it possible this agency thinks Canadians don't know what happens from coast to coast to coast? Americans need to clean up their own mess.

In Canada we spell neighbor neighbour. Bour being a soft sound while bor is hard.

The EPA, being American, is going to spell it neighbor although, as can be plainly seen, I use our spelling, "our."

As to your first observation,Anyong, yes the Americans should answer to Canada for all the pollution that funnels northward out of the Texas gulf region to the Great Lakes and then east to the Maritimes (with our own contributions added along the way). However the situation in Alberta/Saskatchewan is radically worse as in an order of magnitude. Between Athabasca and the upgraders outside Edmonton there are airborne toxins that exceed what is found in Beijing or Mexico City, real lung pluggers and immune system dissolvers. It's also why Saskatchewan is having acid rain drifting over from the neighbours to their immediate West.