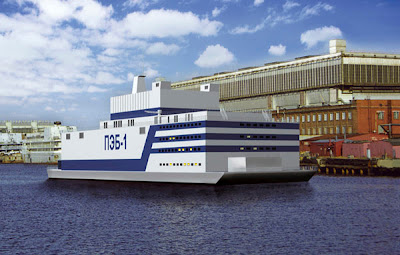 When one thinks of Russia and nuclear reactors what first pops to mind except Chernobyl? That little mishap was the mother of all reactor disasters. The destroyed reactor, the nearby town and neighbouring region remain highly radioactive and abandoned.

So word that Russia is now deploying the first of what will be a fleet of floating nuclear reactor power plants to the Arctic Ocean is raising a few eyebrows. Greenpeace has dubbed the first reactor barge, the Akademik Lomonosov, the world's most dangerous nuclear project in a decade. And the Lomonosov is just the first of a fleet of reactor barges planned to be stationed across Russia's northern coastline.

The first barge reactor won't be idle for long. It's slated to power a Russian high-Arctic oil and gas drilling operation. Beyond powering the oil and gas stampede to the Arctic the Russians claim their barge reactors are just the thing for the developing world too. Russia's minister for nuclear energy Sergei Kiriyenko claimed to have "numerous orders" for the floating power plants.

For those of you who worry about the fragile Arctic ecosystem, well - sorry.
Posted by The Mound of Sound at 8:09 AM

So, how will this floating nuclear power station affect the fragile arctic ecosystem?

A) Unless something catastrophic happens, it won't.

What are the chances of a catastrophe?

A) I think they are likely small. But you cannot believe Greenpeace on this. They are unreasonably anti-nuclear. Saying this is likely to be a second Chernobyl is just false -- not every nuclear plant built by Russians is the same.

crf, these reactor barges are intended to facilitate Russian Arctic oil and gas exploration. It's the drilling that's a plain risk to the Arctic ecosystem even if these barges are engineered/constructed far better than the standard for most russian ships and aircraft.

Greenpeace has an anti-nuclear bias, no question. And not all Russian nuclear plants are of the same design as Chernobyl. That said, there are plenty of Chernobyl-class reactors still running or recently mothballed that have a lot of European neighbours twitchy.

By the way, I didn't claim these reactor barges represent a "second Chernobyl." You raised that. Nice try but no cigar.

Sorry about implying that you thought this could lead to a second Chernobyl. That was wrong of me.

But, why start your post off with the emotionally laden "When one thinks of Russia and nuclear reactors what first pops to mind except Chernobyl" and then leave the reader hanging? After fairly considering the reactor design, is it reasonable to think this new will lead to Chernobyl-like accident: in my mind, no.

In US dollars, how much would one floating power plant cost.

Jim I have no idea and the Russians aren't known for being particularly open or reliable with that sort of information. I do know that the Russians have already got the first of what is supposed to be a fleet of oil tanker/icebreakers to be fielded in the Arctic. They're being built at a South Korean shipyard although which one escapes me at the moment.

Here in Florida with the construction cost for a nuclear plant that Progress Energy is trying to get built reaching $17 Billion, It seems to make sense to have smaller floating plants that are owned & operated by the Navy. With their trained sailors these plants could docked at Port Authorities in Florida and or US water ways. These plants could plug into the electrical grid in area's with higher electrical demand. As a plant might need routine maintenance scheduled, the plant would unplug from the grid and sail to a dock for maintenance while another plant docks & plugs back into the grid. The ship building industry, steel industry, construction industry, technical industry would all play parts into boosting our economy. Plants could be places on the greatlakes, eastcost, westcost, the greater Mississippi rivers. All this could take place on Govt. restricted ports. The costs for our electricity would be a fraction of what the huge private systems that are trying to be built. What might be your expertise on this subject?

Jim, while I have a keen interest in nuclear power, especially the latest, 4th generation fast reactors, I have no particular expertise. Despite the "Ban the Bomb" spillover and the Three Mile Island and Chernobyl mishaps, I'm convinced that nuclear power is an essential component in the alternative energy mix we require to break our addiction to fossil fuels.

I know enough to understand some of the myths that stand as unhelpful hurdles to nuclear development, including the tale about a shortage of uranium.

Adopting floating reactors for use in Florida strikes me as a non-starter. The public is already leery of nuclear reactors and the idea of putting them on the water in such an active storm area as Florida would probably be enough to kill the idea politically.

If you haven't looked into it you really should find out about the 4th generation reactors. Among other things, they can burn the nuclear waste ("spent rods") from 1st and 2nd generation reactors, the enriched stuff we so worry about. They eat it up, they consume it and don't produce enriched waste themselves.