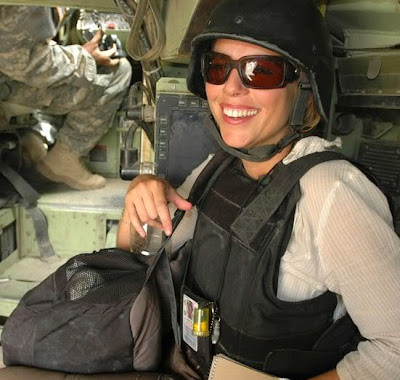 Matt Taibbi has just released his primer on the rot that has befallen what passes for journalism these days in a piece entitled "Lara Logan, You Suck."
It's the story of Rolling Stone reporter Michael Hastings, whose account of backroom chatter led to the sacking of General Stan McChrystal, and CBS chief foreign correspondent and Pentagon back scratcher, Lara Logan, who castigated Hastings for not playing ball with his military betters.
"Here's CBS's chief foreign correspondent saying out loud on TV that when the man running a war that's killing thousands of young men and women every year steps on his own dick in front of a journalist, that journalist is supposed to eat the story so as not to embarrass the flag."
Read it here
Posted by The Mound of Sound at 10:06 AM

Email ThisBlogThis!Share to TwitterShare to FacebookShare to Pinterest
Labels: Taibbi

It sounds as though Logan belongs to the same club as Christie "I Luvs Me A Man In Uniform" Blatchford.

Might want to check your link...I got a Reuters article on Viagra and STIs.

Your link takes me to a Reuters story on STD's.

Thanks. I fixed the link.