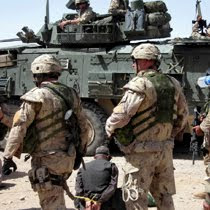 This should become an official career-ender. Ever since Canada got into combat gear in Kandahar, one second-rate staff officer after another has been going on about how we're just on the verge of defeating the "insurgency." What's wrong with that? It's like asking the bus driver to show you the emergency brake and watching him reach for the turn signal. People who make these claims, flying in the face of our years of frustration and failure, have no business commanding our soldiers in the field.

The latest is Lt. Col. Craig Dalton who, at a press conference on Canada's handing over Kandahar City to American forces, dropped this line: "The gradual increase of coalition forces and our Afghan security partners will step up security and provide depth to governance and development. This rising tide of security will set the conditions for the Afghans to defeat the insurgency."

"Rising tide of security?" Who is this clown kidding? Our Afghan "security partners" are as wobbly as ever, by all accounts considerably worse than in our worst dreams. Karzai, at American urging, is reconstituting the tribal militia system and if you think those local forces are going to serve Kabul rather than their local warlords you're dreaming. The central government, its security services, the bureaucracy and the overall criminal/narcotics organization are firmly combined into what Chatham House has long described as a "nexus of criminality."

The much ballyhooed relief of Marjah under McChrystal turned into what that now-disgraced general referred to months later as a "bleeding ulcer."

It's no longer even an insurgency. That morphed into a civil war long ago when the government failed to consolidate control of most of the countryside while the Taliban took over, even to the point of operating its own governmental, administrative and judical systems. Asia Times recently published this assessment:

"Buried in a sea of updates on US and NATO organizational streamlining in the US Defense Department's recent progress report on Afghanistan is the stark admission that 2009 was a good year for the insurgency, which has been gaining support among the Afghan populace. Of the 121 areas deemed strategically critical to the US strategy in Afghanistan, only 29 have populations that support the Afghan government. Since that's a declassified Pentagon statistic, the reality may be even worse."

At least as next year draws to a close we may be relieved from the barrage of bombastic bullshit we've had to endure for much too long from Canada's decidedly mediocre brass. I guess that'll be the icing on the cake.
Posted by The Mound of Sound at 7:38 AM