Water Is the New Oil

A new study has been released documenting the projected sustainability of America's freshwater resources by the year 2050.   The conclusion is that 70% of American counties will experience water shortages by 2050 with about 30% suffering severe to extreme water shortages.   The map below shows those parts of America expected to be hardest hit. 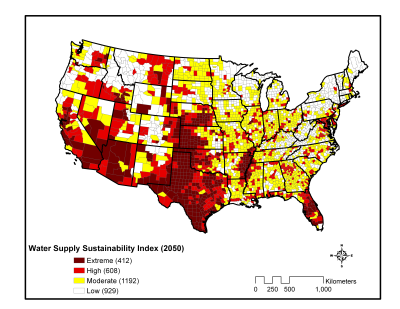 Meanwhile, tens of thousands of Egyptians have taken to the streets to protest water shortages.   This comes at a time when Egypt is locked in a dispute with countries of the Nile headwaters over entitlement to that resource.  From IRIN:

“Water scarcity will be even worse in the future,” Riad Aldamk, head of a water studies project at Cairo College of Engineering, told IRIN.

He said Egypt’s total water consumption had increased by 17 percent in the last five years, according to studies conducted by the college. Hotter summers were partly to blame.

We CLOSED JOINT-STOCK COMPANY AGS OIL is one of the leading Oil & Gas trading companies in Russia Federation with good business reputation and well experienced in the Petroleum and mining sector. We offer the following trades through our reliable Refineries: D2 DIESEL OIL GOST 305-82, JP54 AVIATION KEROSENE COLONIAL GRADE, UREA 46%/PRILLS, LNG, LPG, REBCO, MAZUT100 GOST 10585-75/99, AUTOMOTIVE GAS OIL(AGO). We as well secure allocations from our various Refineries for our numerous buyers who are interested in Spot transactions on FOB/CIF deliveries to any world safe port (AWSP). Our Refineries have their products both at Russian ports and Rotterdam port. we also have a reliable SHIPPING COMPANY if you are in need of find the contact bellow.
Email: baevsergeyalexandrovich@bk.ru
BAEVSERGEY ALEXANDROVICH.