Pakistan Rides the Tiger and the World Trembles 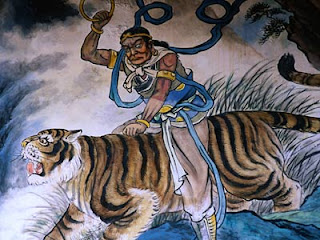 Pakistan is instrumental in a lot of what's going wrong for us in Central/South Asia.   While the Americans have supposedly bought Pakistan's support to fight the Taliban, Islamabad and particularly its military intelligence service, the ISI, have been playing both sides.

Conventional wisdom holds that the West puts up with Pakistan for one reason - it has a nuclear arsenal that we fear might fall into the wrong hands if we don't support the existing government.  In effect, we're hostage to Pakistan's nuclear weapons.   And they know it and they count on it.

If there was ever a reason to forcibly disarm Pakistan of its nukes it could be the danger posed by the government's dalliance with Islamist radicals including the Taliban and other like-minded groups.  As McClatchey Newspapers point out, the Islamists Pakistan supports don't hesitate to bite the hand that feeds them:


The latest is a video that emerged Tuesday of a former Pakistani military officer with longstanding ties to the Taliban who said he's being held prisoner by a militant splinter group and threatened to expose the Pakistani government's "weaknesses" if it didn't release almost 160 imprisoned militants.


Sultan Amir Tarar, known as "Colonel Imam," who helped launch the Afghan Taliban and served as a Pakistani representative to the Taliban movement, said that a splinter faction of Lashkar-e-Jhangvi, an offshoot of the extremist Sipah-e-Sahaba, was holding him.


"You people know about my services for this country and nation. If the government does not care for me, then I will not care for it and disclose its several weaknesses," Tarar said in the three-minute video, first obtained by Pakistan's Aaj TV.

Just what "several weaknesses" is this guy willing to divulge?   And, if Pakistan does release the 160-radicals as demanded, how will it ever say no to future kidnappers?   Is Pakistan's nuclear arsenal vulnerable to Islamist extremists?   Pakistan is riding the tiger and what becomes of it when it has to get off the beast?
Posted by The Mound of Sound at 8:07 AM

Email ThisBlogThis!Share to TwitterShare to FacebookShare to Pinterest
Labels: Pakistan