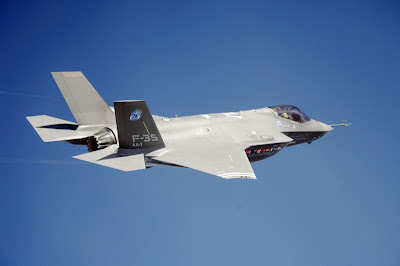 $16-billion bucks for a few squadrons of fighter aircraft. We could have kept the G-20 bacchannal going for a month for that kind of dough.

Peter MacKay wants the Canadian Forces to step right on up to the state of the art F-35 joint strike fighter (JSF) that, like most of these projects, is way behind schedule, way over budget and enormously controversial even in the US where it's being developed. In 2010, Ceasefire.ca was reporting those same 65, F-35s were likely to cost $9-billion by the time the dust settled for delivery in 2017. So, that's nine-billion into 16-billion to order something today and who only knows how much more will be tacked on to the bill by 2017? Make you skin crawl?

The JSF began life as a soap-box racer version of America's F-22 Raptor. It wasn't going to be a full-bore, stealth, Conan the Barbarian, super-cruise, air-superiority fighter but a smaller, single engined ground pounder capable of bringing mayhem to a Pashtun wedding party near you. Like many other countries flying 20-year old American stuff, we signed the dance card to get a bunch, well a small bunch anyway.

So it's going to be back to a single engine to fly the footless halls of icy air over inhospitable, remote and vast northern Canada in February. Decades of experience have taught us that's a job description calling for twin-engine reliability.

Like it or not, we're getting backed into this deal - backed in hard. There was a time you could look around and find maybe three or four alternates. When we settled on the CF-18 Hornet, the F-16 Falcon, the F-14 Tomcat and the Euros' Panavia Tornado were all in the running. (Of the three, only the F-16 was single-engine which prudently ruled it out) There was no end of dickering about cost-offsets and industrial benefits. We got a somewhat sweet deal on the 18 and PET inked the paper.

Today it's not the same. It's pretty much the F-35, take it or leave it. There are a few options - the Eurofighter Typhoon, the Dassault Rafale among them but they're already in service and won't be the "latest and greatest" when 2017 or 2020 or 2025 rolls around. The Russians, along with India, seem to be working on some high-tech stuff of their own, aerial rolling stock that would be a fraction of the cost of the American offering, but we're far too Cold Warish still for the image of a Canadian pilot atop the Maple Leaf roundel painted on the side of Moscow's finest.

Just what in hell do we think we'll be doing with F-35s anyway? We fielded the 18s for Desert Storm against Iraq and again in the Yugo dustup but they've mainly served, quite well in fact, as the defensive force for Canadian airspace. It's that twin-engine reliability thing again.

F-35 development has hit some snags, a lot of them in fact. Software is one. It's expected to be fielded with strike capability, a "bomb truck" in effect, with air superiority mission software bugs to be ironed out later, hopefully. Manufacturer Lockheed Martin got so worked up over testing and development repair costs that it went to the USAF pleading to be allowed to build two less test aircraft than stipulated and skip 800 of the 5,000 scheduled test flights. This urgent appeal came after completion of just 18-test flights, one of them nearly fatal. Kind of makes Toyota a paragon of safety and reliability, doesn't it, and they don't go for $300-million plus a pop either.

If the F-35 is still struggling to prove itself on the toasty, sunny runways south of the border, how do we even know it will be suitable to our northern, winter conditions? How will it operate in the truly far north if we need it there? If this thing remains unproven in the states, if they haven't got the bugs worked out or the costs under control, why are we writing a blank cheque for something that may fail us in the conditions where we could actually need it?

Oh well, I guess if we can blow a billion bucks on a 3-day chinwag in Toronto, $16-billion is really just a few more trips to the buffet line, no?
Posted by The Mound of Sound at 6:52 AM