Why Does Harper Want a Tanker Disaster in Vancouver's Burrard Inlet? 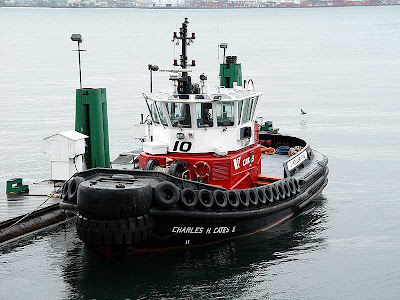 Just how stupid is Stephen Harper? Does he imagine an oil tanker spill in Vancouver harbour is going to enhance his prospects of selling the world's filthiest crude to Asia?

The Tyee reports that Transport Canada has 'quietly slashed mandatory crew requirements for the tugboats escorting oil tankers through the treacherous waters of Second Narrows -- a move that vessel crews feel is needlessly increasing the chance of a major oil spill in Vancouver."

A spokesman for the tug crew union says Transport Canada has exploited loopholes to permit tugs that formerly had to deploy four-man crews in escorting oil tankers to get by with just two crewmembers instead.

"If a tug was operating in the harbour in protected waters, and all it was going to be doing was pushing a ship onto a dock or pulling it off a dock, then they can sail a two-man crew. But the minute that tug hooks onto a vessel and does what's called an escort through the Second Narrows or the First Narrows, then it's supposed to have four man crew. And now Transport Canada is saying that since this is the inner harbour, tugs can do the escort through the Second Narrows with only a two-man crew."

The union also complains that Transport Canada has eliminated the requirement for the tugs to have a qualified engineer aboard escort tugs allowing the operators to substitute a rookie deckhand instead.

With Iggy's announced intention to scuttle a northern Tar Sands tanker port in Kitimat, that leaves Burrard Inlet and Vancouver harbour as the default option. The Second Narrows passage is indeed treacherous for navigation yet the Harper Tories seem content to increase the odds of a disastrous tanker accident that could devastate Vancouver's harbour and tourism facilities.

Astonishing.
Posted by The Mound of Sound at 10:38 AM