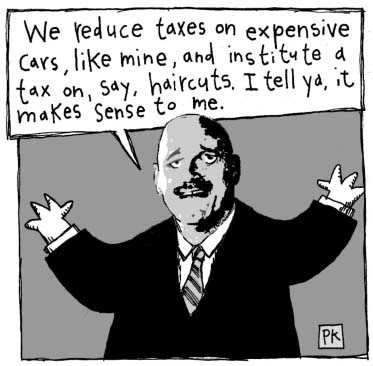 Harmonized sales tax descends on Ontario and British Columbia today. According to some estimates that'll mean an additional $500-800 a year out of the pockets of the average BC family. But will it?

The tax is enormously unpopular. The way the BC Libs snuck it in and then lied through their teeth about it that's entirely predictable. What's also predictable is that plenty of people will be looking for ways to trim back that tax bill, to recoup those extra dollars they'll lose at the cash registers. We'll do what people in other countries have done for centuries. Welcome to Black Market Canada where deals are done in cash and the taxman is cut out of the loop.

The Canadian Press reports that the anticipated blowback to the HST has a lot of the service industry very, very worried:

Craig Bennett is sick of hearing customers threaten to take their roofing requests to under-the-table competitors and he believes business is only going to get worse for legit services now that the harmonized sales tax has officially hit in Ontario and British Columbia.

"There will be a thriving black market," says Bennett, deputy director of Toronto-based Avenue Road Roofing. "I think (the HST is) going to be wreaking havoc for people in the service industry," he adds.

...service-oriented business owners are skeptical about any benefits because the HST will be attached to a host of their offerings — from home maintenance to massage therapy to tennis lessons — that were previously exempt from the provincial tax.

Stephen Dupuis, president of the Building Industry and Land Development Association, says the underground economy is already a huge problem in the renovation and home repair industries, but will grow even more when the HST comes in, just as it did when the GST hit in 1991, he says.

There's a lesson to this. People pay tax by consent. If they don't consent to a tax, if they don't consider a tax legitimate, they will find ways around it or ways to offset it. Once under the table cash deals become acceptable in the public's mind, it's government that has a problem.
Posted by The Mound of Sound at 1:18 PM

Barter alive and well. And you laughted at me for saying so earlier...smile!! You can call it the black market, I'll call it bartering and you know what, they will find a way to tax that too and or throw people in jail. Anyong

Where have you been? Pretty much the entire construction industry is based on sub-sub-sub-sub contractors working off the books.

Why? Workmen's Comp, UIC and CPP that's why. Nobody can afford to pay it, or income tax, on the pittance homeowners are willing to shell out for painting, roofing, paving and etc. So they don't pay it. Cash is king, baby.

High taxes lead to black markets, duh. Yah we know, its been that way in Ontario sice the 1970's.

What will this mean as far as taxes go for Canadians each year? Is this in any way tied to the universal healthcare stuff? Who can point me towards the Canadian legal code to read more?