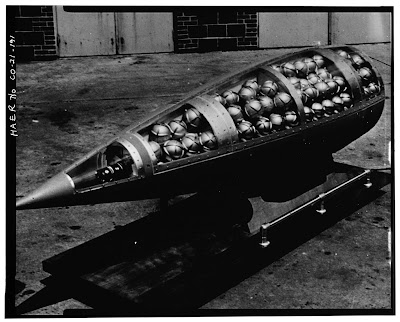 For 107 countries, the use, production and stockpiling of cluster bombs is officially banned beginning Sunday, August 1st.  From AlterNet:

Dropped from aircraft or fired from artillery or rockets, the weapons scatter bomblets over a wide area, but have limited military impact today as they were designed to attack tanks on an open battlefield, an increasingly rare scenario, they said.

Cluster bombs often fail to detonate immediately and can explode years after a conflict, killing or maiming civilians in Laos, Kosovo and Lebanon, according to humanitarian groups.


"These weapons are a relic of the Cold War. They are a legacy that has to be eliminated because they increasingly won't work," Peter Herby, an arms expert at the International Committee of the Red Cross (ICRC), told a news conference.


Support is growing for the Convention on Cluster Bombs, adopted in May 2008 and ratified by 37 states including Britain, France, Germany and Japan, which all have significant stocks.


But the United States -- the world's largest producer with the biggest stockpile of 800 million submunitions -- has shunned the treaty, although it says it will ban the weapon from 2018.


China and Russia have also stayed away and don't disclose their stocks.

...Most countries are turning away from the weapon because they kill too many civilians and undermine political objectives, according to Thomas Nash, coordinator of the Cluster Munition Coalition. Lockheed Martin and Alliant Techsystems are among U.S.-based companies known to have produced cluster bombs in the recent past, he said.

As ever, the problem isn't with the weapon itself so much as our inability to resist using it inappropriately.   Cluster bombs, like land mines, have a legitimate purpose in conventional, battlefield warfare - army versus army.   But those who use the things like to fire them into civilian areas, fail to keep track of them and simply leave them where they fall to claim the lives of innocents, too often children, for many years afterward.   The Israelis have provided ample justification for banning these weapons.
Posted by The Mound of Sound at 9:10 AM

i'm curious about the baseball sized round balls that come out of the bomb to whether they are explosive? my roomate and i were at a surplus store and bought one. they are the ones shown in this article

Yes, Gene, those bomblets packed into a cluster bomb are highly explosive. They also vary in shape. Some are round, others cylindrical. Another round-shaped ordinance is the hand grenade currently in wide use.

However if you bought one of these items in a surplus store, let's hope it is an inert practice grenade. If you have the slightest doubt you should contact your police department for advice.