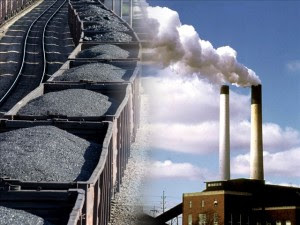 America's uber-right Supreme Court gave them the hammer and Big Coal is wasting no time in preparing to use it to swing November's mid-term elections against "unco-operative" Democrats.  From McClatchey Newspapers:


The companies hope to create a politically active nonprofit under Section 527 of the Internal Revenue Code, so they won't have to publicly disclose their activities — such as advertising — until they file a tax return next year, long after the Nov. 2 election.

America's corporatist (yes, as in "fascist") Supreme Court has taken the shackles off corporate meddling in American election campaigns.   Even foreign companies can get in on the act, using their wealth to shape voters' minds.
Posted by The Mound of Sound at 7:33 AM

More to the point, let's stop pussy footing and get on with the job of openly talking about over population big time. That is the cause of everything negative that is happening in the world today. How many environmentalist open their mouths loud and clear about this problem?

I suspect people are reluctant to address overpopulation because of the implications of the remedy or "solution" if you like.

If, as some have opined, the earth's carrying capacity is roughly three to four billion and we're approaching seven on our way to a predicted nine, that would mean somehow cutting our population back by five to six billion. That's a lot of souls to make disappear.

What do you have in mind? Remember neither China nor India will accept that they're overpopulated even with China's "one child" programme.