The Republican clown car just never runs out of gas.   The latest RepubliJester is Scientology-backed Riverside County supervisor and lawn cutter Jeff Stone who wants southern California to secede from everything from Los Angeles north.

He's proposing a 51st state, "South California." It would include the counties of "Fresno, Imperial, Inyo, Kern, Kings, Madera, Mariposa, Mono, Orange, San Bernardino, San Diego and Tulare" -- all of which have high concentrations of white pick-up trucks and meth heads. 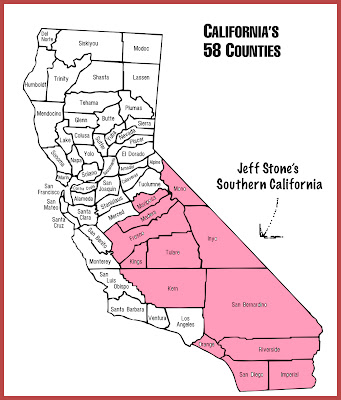 Stone's not only mad as hell about illegal immigrants and fucking hippies running his state, but, as he told the Los Angeles Times, "Los Angeles just enacted a ban on plastic grocery bags. That put three or four manufacturers out of business." So, how will the state handle this growing right wing insurgency? Governor Jerry Brown's spokesman gave the LAT this gem of a quote:

"It's a supremely ridiculous waste of everybody's time," said spokesman Gil Duran. "If you want to live in a Republican state with very conservative right-wing laws, then there's a place called Arizona.''

The nice thing is that Jeff really only wants the shitty parts of the state.   I'm guessing the ruckus is because Jeff is really pissed at having been fined  $16,000 a few months back for failing to report some $84,500 in contributions to his failed,2010 campaign for the California senate.
Posted by The Mound of Sound at 10:28 AM

Email ThisBlogThis!Share to TwitterShare to FacebookShare to Pinterest
Labels: republican