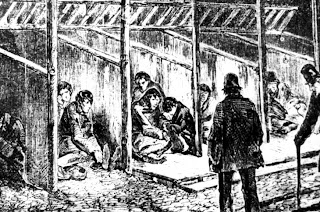 To all my wonderful American friends wrestling with your country's debt and deficit crisis.  You're obviously incapable of seeing the forest for the trees so here's a FOX-free way to look at your problems.

When your government began running deficits in the very early Bush II days, you had a problem.  That man-chimp of a president and his Reagan-loving pals in your Congress decided they would just ignore that problem and yet launch two ruinously-expensive wars while handing out ruinously-large tax cuts for your richest of the rich.   How did they fund those wars?   They borrowed the money from foreign lenders.  But, here's the bitch, they also borrowed more trillions from those foreign lenders to cover those tax cuts for the rich.  That's right, chumps, they didn't have the money in house to fund those tax cuts.  They needed the money they left in the pockets of those rich folks.   So they pledged your good credit plus that of your children, probably your grandchildren too, to cover those dandy wars and those tax cuts for the rich.   Those rich folks are having a riot.   They've used their influence to transform America into a tax haven for the rich and, the best part, is that you're going to have to pay for it.

Now I understand you were much too busy back then to notice.  You were fixated on the fantasy that your homes were skyrocketing in price and would just keep on going - forever.  With fantastically low interest rates that meant that just about anyone could own a residential money mill and enjoy what you thought was the American Dream.   And that's why I call you "morons."   You were way beyond stupid, light years past that.   And don't think the guys who duped you didn't notice.   They gazed out upon all you sheeple and realized you were theirs for the fleecing as often as they wished.

Now that they've got so many of you "underwater," your fantasy homes anchored around your necks, holding you firmly on the bottom, they've figured out there are ways to get blood out of your rocks if they just squeeze hard enough.   What have you got left to lose?  That's easy - your "entitlements."  Listen up, morons.   An entitlement is, by its very definition, something deserved.   You earn your Social Security entitlements by all those payroll taxes you part with in your soon to be endless working lives.  That's your money.   That's why it's an "entitlement."   But the guys who want to just keep squeezing the life out of you have figured out that if they can get you to believe an entitlement is an undeserved handout they can take that too.

So who are these guys who are squeezing the very life out of you and your kids?   Why they're the very people you send to Washington, supposedly to represent your interests and do what's right for your country.  But if the past decade has proven anything it's that they don't represent your interests, they don't do what's right for your country.   So if they're not representing you, who are they working for?  That's not hard to figure out.   The ancient Romans had a saying, "cui bono?"   That's Latin for "who benefits?"  I think we covered that earlier.   The folks who've benefited from your Congress are the same folks who, long ago, bought and paid for your legislators - the richest of the rich.  They found that a little bit of cash (although what's little to them is an awful lot to you and me) can pay off big time when it's used to buy the votes needed to do their bidding in the House and Senate.  It's unquestionably the best investment they ever made, hands down.   The way they're going they'll soon be able to buy the dream world Dickens wrote of.    Welcome to the 18th century.  And no, you may not have another bowl of gruel.   Now, get back to work.   You have debts to pay, even if they're not really yours.

And, because you might not believe what I said about your boy, Bush, watch this.  In fact, hit the "replay" button and watch it again and again and again until it sinks in.

There, now doesn't that leave you feeling like a moron?
Posted by The Mound of Sound at 9:52 AM

Bush the asshole destroyed America and its economy and Americans have still not caught on.

Now Repugs and Tea Partiers are doing everything to destroy Obama's presidency, screw ordinary folks in the process, but Americans are not catching on.

I think it's important to remember Canada likes to follow in Americas footsteps (say about 5 years later)...