Global Warming is Real, It's Lord Monckton Who's a Fake 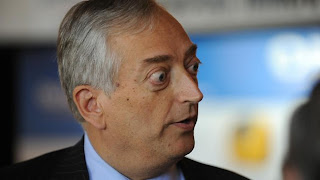 Global warming denier, self-styled "Lord" Christopher Monckton has been warned by the British House of Lords to cease and desist his claims that he is a member of that body.

Monckton, who did inherit a peerage as Viscount of Brenchley, tells all who'll listen that he is a Lord, just without the right to sit or vote in the House of Lords.   To that extent, we're all probably Lords.

The HoL has had enough of Monckton's claptrap and published this notice on its web site:

"You are not and have never been a member of the House of Lords. Your assertion that you are a member, but without the right to sit or vote, is a contradiction in terms. No one denies that you are, by virtue of your letters patent, a peer. That is an entirely separate issue to membership of the House. This is borne out by the recent judgement in Baron Mereworth v Ministry of Justice (Crown Office)."

In 1999, all but 92 of Britain's 650 hereditary peers were debarred from the HoL, Monckton's dad among them.   Lord Monckton looked surprised at the news but, then again, he looks surprised at anything.
Posted by The Mound of Sound at 6:30 AM

Email ThisBlogThis!Share to TwitterShare to FacebookShare to Pinterest
Labels: monckton

The abbreviation should be HOLE where you sink money for no good. Senate is patterned after that.

Oh for all the wanna be's so they can be close to the realm.