The Very Face of Corruption 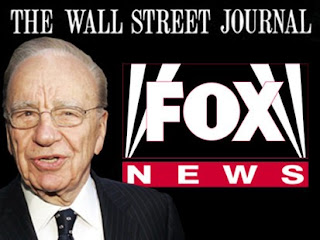 This is what the Corrupter Incarnate looks like and it's not pretty.  Anything he touches, including the Wall Street Journal, turns to slime.   Anything he creates, like FOX News, is fueled on slime.  In any legitimate democracy, people like this have no place in the mass media.   At the very least, his corporate aggregator, News Corp, ought to be renamed NewsPorn.

This very thought is now running through the heads of British politicians who, following their endless phone hacking scandal, are finally openly questioning whether Murdoch's operations can possibly meet the "fit and proper" requirement to hold a broadcast licence.   That they have to ask shows how much power this old bastard still wields.


British deputy prime minister Nick Clegg is urging Murdoch to "do the decent and sensible thing" and drop his bid to acquire control of British Sky Broadcasting.
Posted by The Mound of Sound at 6:58 AM

Email ThisBlogThis!Share to TwitterShare to FacebookShare to Pinterest
Labels: Murdoch