The Deadly Disease of Religious Fundamentalism, a Timely Warning 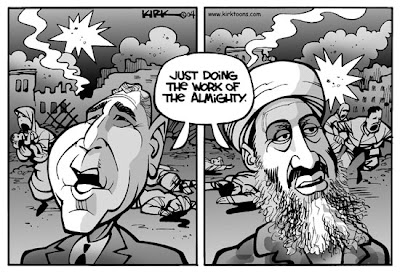 It's time we stopped treating religious fundamentalists - Muslim, Jewish, Christian, Hindu, whatever - as essentially benign and off limits under our democratic notions of freedom of religion.   Religious fundamentalism breeds violent extremism, terrorism.   It is imbued with characteristics and traits that both enable and encourage extremism.

Religious fundamentalism is not strictly religious, not at all.   It is also a social and political movement that seeks "imposative" reform.  It exists to impose a narrow religious, social and political order.   It is not interested in democracy.   It rejects tolerance and liberalism.  There are powerful reasons it takes root and flourishes in the far right.

You can learn more about creeping fundamentalism in books such as Phillips' American Theocracy, Bacevich's The New American Militarism, Hedges' American Fascists, McDonald's The Armageddon Factor, and many others.   However I think the best scholarly treatment of the causal link between radical religion and violent extremism is a paper by Douglass Pratt, Terrorism and Religious Fundamentalism:  Prospects for a Predictive Paradigm, 2006, published in the University of Marburg Journal of Religion which can be found, in PDF format, here.

At page 8, Pratt explores twelve key factors, common to all fundamentalist religions, that "...move a fundamentalist mindset from the quirky to the critical, from atavism to aggression,  from benign eccentricity to socially endangering activity."

Terrorism and Religious Fundamentalism is a genuine eye-opener and a must-read for any progressive.  It's only 15-pages in length and deserves to be read in its entirety.   Do yourself a favour and follow the link above.

You ought to take in one of their services on Sunday MOS....right here in Canada. Attending one recently opened my eyes to the hatred being cultivated.

If you can get adults to suspend their disbelief to fervently believe some guy 2000 years ago was born without conception and died on a cross for our sins (what the hell does that mean anyway), you can quickly go to any length.

I don't know if that's true, Steve. Although I'm agnostic and, as such, hardly qualified to inventory Christianity in all its forms, there are some, such as the Quakers, who read a much different message in the Bible from that of the fundies.

Chris Hedges in his book American Fascists notes that there are literally hundreds of interpretations of Jesus in the US. Each of these pseudo-churches spins Jesus to match their preferred message.

@Anon. I believe you. Now remember that Stephen Harper and some of his closest cronies spend their Sundays in those very pews.