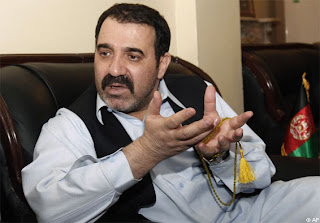 The controversial brother of Afghan president Hamid Karzai has been murdered by his bodyguard in Kandahar.  Ahmed Karzai was gunned down in his home by one of his bodyguards who was then cut down by other guards.

The younger Karzai was head of the provincial council in southern Kandahar province.  He was also reputed to be a major drug baron who operated with impunity under the protection of old brother, Hamid.


Mr Karzai’s death is likely to have a profound impact on politics in Kandahar, where rival power-brokers are vying for political influence and access to lucrative logistics contracts to support the Nato-led force.


In the past six years, Mr Karzai built up a formidable power base using a network of tribal elders, senior members of the security forces and warlords to extend his influence in Kandahar, the birthplace of the Taliban.


Although sometimes at odds with his older brother, he formed a key pillar in the patronage system that President Karzai used to project influence into the south.


...to his critics, he was the don of a “shadow government” of narco-traffickers, gun-runners and militia bosses whose attempts to hijack the Afghan state fuelled support for the insurgency. He was regarded as far more powerful than Tooryalai Wesa, the western-backed governor of Kandahar province, who has struggled to assert his authority in a region where alienation from the state runs deep.

The Taliban have claimed responsibility for the assassination.

The tensions between Washington and Islamabad went up another notch when Pakistan's defence minister warned his country's troops may be pulled back from the Afghan border area in response to America withholding some $800-million in military aid.

"If at all things become difficult, we will just get all our forces back," Defence Minister Ahmed Mukhtar said in an interview with the Express 24/7 television to be aired later on Tuesday.
"If Americans refuse to give us money, then okay," he said. "I think the next step is that the government or the armed forces will be moving from the border areas. We cannot afford to keep military out in the mountains for such a long period."

Yeah, it sure sounds like we've got the Talibs on the run, utterly whipped, trashed.  Before leaving Afghanistan, however, a fresh report finds that our Western-made, new and improved Afghanistan scores dead last on maternal mortality and female life expectancy.  That's last as in the very worst in the world.

According to the State of the World’s Mothers 2011 report, published on 24 June by NGO Save the Children, about 50 women die in childbirth each day in Afghanistan. One in three is physically or sexually abused and the average life expectancy of women is 44.

It said that more than 85 percent of Afghan women are illiterate, while 70 percent of school-age girls do not attend school for various reasons - conservative parents, lack of security, or fear for their lives.

Taking all indicators into consideration, “Afghanistan is the worst country” to be a mother, concluded the report, which assessed 164 countries. Children in Afghanistan, along with those in sub-Saharan Africa, too have the highest risk of death in the world. One child in five, the report said, dies before reaching age five meaning ‘every mother in Afghanistan is likely to suffer the loss of a child”.
Posted by The Mound of Sound at 6:36 AM

Ah, what a difference ten years makes. We've really transformed that place... taken it back to, oh, 1987 or so. When the Americans pull back, the mayor of Kabul, Hamid Karzai - especially now that his drug dealing kingpin of a brother is toast - will last about six months before he goes the route of the last Soviet era leader, Najibullah - strung up by the Taliban - or flees the country to return to his job as a consultant along with his buddy Zalmay Khalilzad.
What a sad, sad waste of money and lives, all for global power games.

By many accounts, Hamid is already prepared to di di mau out of Kabul on short notice. Apparently he, like many of his underlings, has a suitable fortune stashed in various foreign banks. With Ahmed getting lead poisoning, Hamid must be doing the math.