The Face of Drought - Brasil

Severe drought is becoming commonplace around the world.  Even the southern United States has been hard hit from Georgia and Florida to Arizona and California.  Brasil's Amazon rainforest isn't being spared either.   These photos, published in The Guardian, chronicle the Amazon tributary, Rio Negro, that is at its lowest levels in a century. 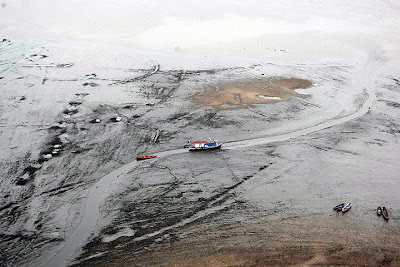 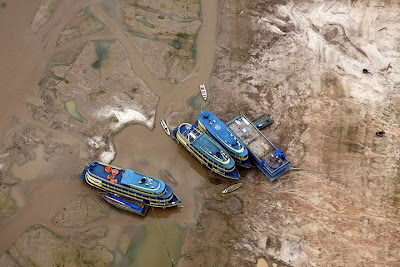 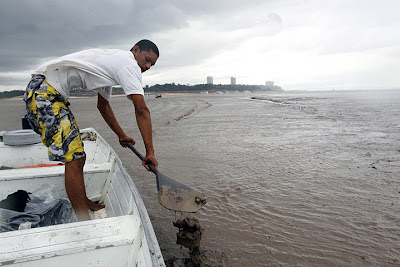 The drought in Africa is said to be affecting up to 11 million people and is finally being linked to climate change in the media. Of course, the deniers are out in force, claiming it's the fault of the victims for reproducing. Hey, they say, developed nations have given enough and have their own debt problems. Don't worry, be happy, and get that dirty flowing around the world to grow our economy. Depressing.

Hi LMA. Recently I found a bit of quiet time to reflect on what summers and winters were really like in the 50s through the 80s. Hockey games on the lake, building snow caves in the boatwell, teens spending the whole summer working to perfect a tan, the steady and regular progression of seasons, newscasts that only rarely featured severe weather stories - in effect climate stability.

It is only by that sort of exercise that it becomes so apparent today that our climate hasn't changed, it has actually mutated into very erratic and far more destructive weather and storm events. If we would have experienced a balmy day or two in Ontario in February in the 60s it would have triggered a mass panic. Today it's simply accepted as a nice break in the weather. Drought in England, imagine it. It has become what the Guardian has termed "global weirding".

I do tend to think we have to hold certain countries accountable for overpopulation. India and China now account for roughly the entire population of the world when I was born. In my opinion that is really unsustainable. Between exhaustion of resources at one end and destruction of the environment at the other, this is a candle burning fiercely at both ends.

Both of those countries have grown enormously through over exploitation of their freshwater resources. It has been an ecological conjuring act that has left them alarmingly vulnerable in the decades ahead. To compound these problems many of these countries are getting to the point where they're needing to burn fossil fuels to get freshwater through desalination. A desalination plant is an admission that a particular region has become uninhabitable to its population to the point that it is compelled to overtax the atmosphere and destroy its coastal ecology to keep its lawns watered.

For most of my lifetime, actually for many thousands of years, mankind relied on free, clean energy from the sun to power our hydrological cycle, to create water vapour and clouds and the winds that distributed precipitation in benign patterns that allowed civilization to thrive. That cycle was unquestionably the fundamental resource of all. And now it's broken, horribly broken. And we broke it in our quest to maximize consumption and procreation.

We are hard-wired to consume and procreate for survival, but are we capable of curbing our appetites when they prove to be self-destructive? History seems to say no, so I think our growth will ultimately be limited by the collapse of our species.

I can't bring myself to hold any nation accountable for overpopulation as long as I am part of the overconsumption of the developed world. As you expressed in your post, "This is the Face of Climate Change", Canadians are in no position to criticize people dying in Africa when we are basing our economic growth on the global export of tar sands oil which will only add to their misery.

I must say the heartlessness and hypocrisy of some of the comments in my local online newspaper regarding the plight of the people in Africa have turned my stomach. I am beginning to doubt that the average Canadian cares about anything or anyone that doesn't directly impact his/her wallet.