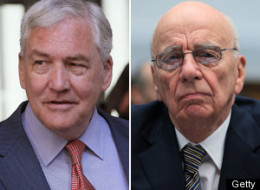 A big h/t to Matthew Steeples of London, apparently Knightsbridge, who brings us a glance behind the paywall of the Financial Times for a look at how the lordly Conrad Black views rabble like Rupe Murdoch:


“All his instincts are downmarket; he is not only a tabloid sensationalist; he is a malicious myth-maker, an assassin of the dignity of others and of respected institutions, all in the guise of anti-elitism. He masquerades as a pillar of contemporary, enlightened populism in Britain and sensible conservatism in the US, though he has been assiduously kissing the undercarriage of the rulers of Beijing for years.”
“… Although his personality is generally quite agreeable, Mr Murdoch has no loyalty to anyone or anything except his company. He has difficulty keeping friendships; rarely keeps his word for long; … and has betrayed every political leader who ever helped him in any country, except Ronald Reagan and perhaps Tony Blair.”
Ouch, Connie!  That's a tad harsh now isn't it?  Be nice to Rupe.  He may be the next guy to occupy your bunk in the GreyBar Hotel.
Posted by The Mound of Sound at 5:44 PM

What a wonderful world we think we live in!
The media barons live in a world that we can only dream about & be thankful we are not so greedy & self centred.
Both Black & Murdock have tried to manipulate the news in their own image ; it's time for them all to be jailed.