"An Extraordinarily Dangerous Place" - Iraq on Eve of American Pullout 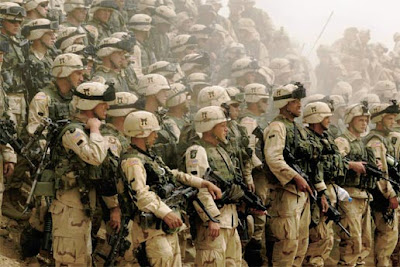 Washington's Iraq Special Inspector General for Reconstruction, Stuart Bowen, has taken the measure of Iraq today and laments the deterioration of security in the country.

"Iraq remains an extraordinarily dangerous place to work. It is less safe, in my judgment, than 12 months ago."

The report cited the deaths of 15 US soldiers in June - the bloodiest month for the American military in two years - but also said more Iraqi officials had been assassinated in the past few months than in any other recent period.

Bowen says the current wave of unrest seems to be the work of Shia militias.  The Shia seem to be nipping at the heels of American forces, presumably to reignite  American popular dissatisfaction with the Iraq war.

It was recently reported in The Guardian that the most influential player in Iraq today is an Iranian general, Qassem Suleimani.   The general heads Iran's elite al-Quds Force.

In Baghdad, no other name invokes the same sort of reaction among the nation's power base – discomfort, uncertainty and fear.

"He is the most powerful man in Iraq without question," Iraq's former national security minister, Mowaffak al-Rubaie, told the newspaper al-Sharq al-Awsat in July 2010. "Nothing gets done without him."

So, with Iraq nominally under the influence of a shadowy Iranian general, whose own elite force is said to employ Iraqi Shia militia as surrogates, the step up in attacks on American soldiers in Iraq is hardly surprising.


It is said that Suleimani basically strongarmed Iranian legislators into accepting Maliki's second term in office.   Is it any wonder now that Maliki vacillates over Washington's offer/request to keep 10,000 US soldiers in Iraq after the December 31 deadline for their withdrawal?

We can probably expect to see a significant increase in violence bordering on an actual uprising in Iraq over the next five months while the issue of should the Americans go or stay is decided.   Iran bridles at the American military presence on its borders with Iraq and Afghanistan and it's hard to imagine Baghdad defying Tehran.  The US may be left no choice but to pack up their bags and get out in time for Christmas.
Posted by The Mound of Sound at 7:40 AM