And This is Surprising, How? 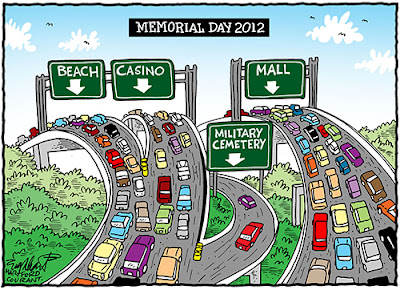 Disability claims are flooding in from surviving veterans of America's failed wars in Iraq and Afghanistan.   The Associated Press reports that about 45% of these vets have filed claims.

The news has sent those for whom these wars were spectorial into some decidedly unseemly speculation as to what lies behind the phenomenon, why these veterans have so many more disability claims than vets in previous wars.


"It's unclear how much worse off these new veterans are than their predecessors. Many factors are driving the dramatic increase in claims - the weak economy, more troops surviving wounds, and more awareness of problems such as concussions and PTSD. Almost one-third have been granted disability so far."

What's completely omitted from the assessments is what must be the greatest contributory factor - compulsory, multiple deployments.    Soldiers getting sent back to war again and again and again.   There's a reason why America has only 1.6-million veterans of the Iraq and Afghan wars.  That's because the American public and their Congressional leadership refused to accept the need to reinstate the draft.  That meant the burden of these wars, including the disabling wounds, were shouldered by a small number of personnel who were constantly recycled through war zones.

In Vietnam, a draftee served a single, 12-month combat tour.   D-Day to the collapse of the Third Reich took about 10-months.   Afghanistan will be 13-years of futility before it winds down.
Posted by The Mound of Sound at 7:28 AM