Harper, You Punk, Man Up!

Those goddamned self-righteous Tories like nothing better than to preach responsibility except when they get a chance to dodge it themselves.   And, when a chance does arise, they'll use their full bag of tricks - secrecy, deception, manipulation, fear mongering - to get really stuck into their dodge.

And so far I figure Harper's biggest responsibility dodge, perhaps the greatest one in our history, is the Athabasca Tar Sands/Northern Gateway scam.  On that one, he's in full-bore, balls to the wall, EnRon mode.

The Northern Gateway (and the Kinder Morgan scam through Vancouver's inner harbour) are all about one thing, shipping dil-bit, or diluted bitumen, to Asian markets in the holds of supertankers.

The operation sees these tankers arrive at our docks carrying dilutents that are pumped to Alberta where they're mixed with lightly processed bitumen.   As their name suggests, these liquids dilute bitumen enough that it can be pumped through pipelines back into those supertankers' holds.   From our docks that toxic, carcinogenic sludge passes through and grievously endangers our British Columbia coastal waters so that it can be shipped all the way to Asia for refining into synthetic crude oil.

Do you see all the effort involved here?   It begins with tankers full of dilutents produced offshore that have to be shipped all the way to British Columbia in tanker holds and then pumped all the way to Alberta so that they can be mixed with bitumen into a sludge that can then be pumped all the way back to British Columbia docks for loading into supertanker holds for shipment all the way back to Asia so those dilutents and all the other bitumen crap can be refined out to create synthetic crude oil.   The carbon emissions in the shipping alone are enormous and all the extra expense and environmental risks make that so much worse again.

Is there an alternative?   Of course.   We could skip the dilutent/dil-bit trans-oceanic dance altogether and, instead, do the full refining operation right on site, in Alberta.   Take the sludge, upgrade it into raw bitumen, refine that into synthetic crude oil and pump that to our foreign customers if need be.   Why do we have to transport all these abrasives, corrosive acids, heavy metals, carcinogens and other toxins in an impossible to treat goop that sinks right to the bottom in the event of a spill?   What's the motivation to do that?   After all it's more expensive, more complicated and far more dangerous to transport dil-bit sludge than it is to ship refined synthetic crude.   So why are Harper and the Oil Patch so insistent on doing something so obviously unproductive, unnecessarily expensive and risky, boneheaded even?  Why?   Well, as near as I can figure it, it's an accounting error, a la EnRon.

You may remember EnRon, the Texas energy giant that feigned mega-wealth and profitability by carrying giant liabilities "off the books."  It was all the brainchild of this whiz kid, Jeffrey Skilling, seen here doing the "perp walk" that was all the rage back then: 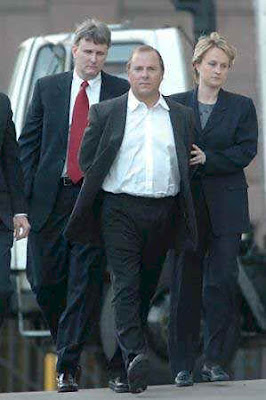 So why isn't the Alberta Oil Patch building refineries to handle all this Asian trade?  My guess is that Big Oil and the Alberta and federal governments would much prefer to "offshore" the carbon emissions and other environmental impacts of refining that bitumen sludge.   Just as Jeffrey Skilling taught EnRon to keep massive liabilities off the books, so offshoring dil-bit keeps  massive carbon emissions and other enviro impacts off Canada's and Alberta's books.   And that's just wrong.

It's wrong to expose vast tracts of Alberta and British Columbia to the inevitable pipeline spills for which Enbridge has such a proven reputation.  It's wrong to expose coastal British Columbia to the godawful risks inherent in dil-bit spills from the tanker disasters that are inevitable.    It's just wrong to generate unnecessary supertanker traffic to carry dilutent/condensates that aren't really needed.  It's just wrong to deprive Alberta/Canada of the jobs, revenues and profits of those refinery operations.

But, above all else, it's wrong for Canada to "offshore" our responsibility for the carbon-emissions and other environmental fallout of transforming tar sand into synthetic crude oil.   We know how poorly China handles this sort of thing.   If you knowingly hand the keys to a drunk driver in the middle of a parking lot full of baby carriages, you're doing the wrong thing.   That's irresponsible.

If Harper is going to ram through pipelines to carry Athabasca petroleum products through to Asian markets, it's his responsibility to see that done at the absolute minimum risk to Canada and, in particular, to the province and people of my own British Columbia.  He has no moral right to place us and our pristine coastline in dire risk so that he can "offshore" the environmental implications of bitumen processing.   It's time for that despicable weasel to Man Up.
Posted by The Mound of Sound at 7:12 AM

Oil companies want the oil. And they want to minimize costs. It's cheaper to export raw bitumen to countries with lower wages and regulatory standards, and upgrade it there.

As far as I am concerned, the oil sands are a fact here to stay. It's politically impossible to stop, and it is not going to be "game over" for the climate if they are exploited appropriately. Coal to liquids is game over. What's Canada doing to stop the need for coal to liquids?

But how they are exploited is something that has to change, because, at nearly every facet of this industry you care to look, you'll likely see that Canada's best interests as whole are not being considered.

The upgrading question, which could create jobs and expertise in Canada.

The effect on the dollar, which harms all other export industries. In particular Ontario.

The fact that Alberta is now anti-nuclear, harming Ontario's potential to sell Alberta nuclear electricity and process heat to minimize the emissions from processing bitumen from sands. Ontario should be selling nuclear and renewables in Alberta right now. The media is deaf, dumb and mute on this issue, while they castigate McGuinty for daring to tell the truth that a strong petro-dollar harms his province's export industries.

The fact that Ottawa's international stance on climate change, from trade to treaties to scientific cooperation is being run to the exclusive benefit of Alberta's oil sands industries, and against Ontario's, Quebec's and B.C. clean energy industries and electrical engineering expertise.

In my mind, too much time is spent naval-gazing at our own oil sands problem, when a more pressing issue is the non-involvement of Canada (among other countries) in sufficiently pushing clean energy technology throughout the world, where we could do much good. There are not many countries with the engineering, educational and financial assets capable of making a difference in this area: but Canada is one such country and we are selling the world short.

As I remember, Peter Lougheed's plan was to use Alberta's oil wealth to help build "secondary" industries.

There was money, he argued, in producing valued added products.

Lougheed had a vision. All these folks can do is root around, like pigs in the pen.

@ Owen, yeah Lougheed has been a persistent critic of the rapacious exploitation of tar sands resources. He favours much more measured development, keyed to Alberta's interests instead of Big Oil's. And that may just be why Lougheed was the last great leader of Alberta.

Very well said, MOS, and crf, you add even more sense to the argument, which should be clear to the idjits making the decisions.

As long as fossil fuels dominate energy use we'll have this kind of problem. The major renewable energy sources are in effect manufactured goods rather than raw materials. As such, like most manufactured goods, they have a consistent record of getting cheaper the more are produced.
Ergo, the sensible thing is to subsidize 'em so more of them get produced, speeding up the arrival at the tipping point where they're just plain cheaper than oil and coal. And also helping make sure we're a bigger player in that production, because renewables will come to dominate and their production will be a big economic driver, at which point we will look really stupid if we have to import them all.