Oooh, This Could Get Nasty

China has provoked outrage in the Philippines by deploying this oil platform, the country's first deepwater drilling rig, into the South China Sea. 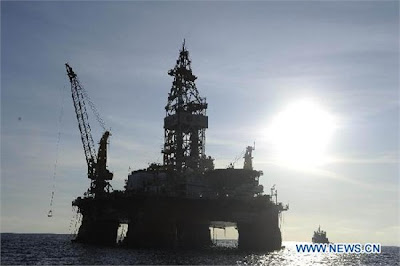 According to Reuters, civil society and political groups with links to Philippine President Benigno Aquino III's political allies plan to take to the streets on Friday to "protest the Chinese presence" in waters near Huangyan Island.

The Chinese embassy in Manila has issued a safety alert, advising Chinese nationals to enhance safety awareness, avoid going out and stay away from protesters.

A Global Times correspondent in Manila said the Chinese communities there are calm despite Friday's looming protest.

"Issues concerning sovereignty are non-negotiable for China. The Philippines took China's restraint for granted and kept staging provocations," a researcher surnamed Ma with the Southeast Asian Institute of the Guangxi Academy of Social Sciences, said.

"The planned global protest against Chinese embassies has shown Manila's intention to internationalize and complicate the issue. Beijing will lose its patience if Manila doesn't back off," Ma said.

Hard as this may be for Canadians to believe, the BBC is reporting that the Chinese do seem to be spoiling for a military confrontation.

War talk, it seems, is all the rage in China at the minute.
Yes, there are serious people in serious publications seriously advocating war.

...The odd thing here is that the Philippine navy consists of just one proper ship and that is an ancient US Coast Guard cutter which is hardly a match for China's navy, as this online commentary by "The Comparativist" makes clear.

The Comparativist writes: "I think this is happening because the Philippines is so weak. The Chinese government can beat the war drums all they want, and as loud as they want, and no war is going to happen. It's akin to bullying someone in a wheelchair that you know can't punch back."


But there are dangers here too. The president of the Philippines has tweeted this statement this week, making clear that the Philippines believes America will help protect it from any Chinese aggression. So a dispute could lead to a very tense situation.

China's policy in the South China Sea is not a simple matter, directed clearly from the top as the International Crisis Group has detailed, but affected by many different players.

It's a dangerous dynamic that could escalate much further yet.
A few other things to consider.   The United States recently conducted Operation Chimichanga, a stealth bomber, fighter live-fire exercise simulating a first strike against China.   There are escalating tensions developing between an ascendant China and a U.S. is slow decline that could quickly transform into a new Cold War. And last month The Guardian reported on recent war games between US and Chinese military leaders during which Chinese hostility toward the United States seethed to the surface.
Posted by The Mound of Sound at 8:51 AM