Is It Merely Gross Incompetence or Something Truly Sinister? 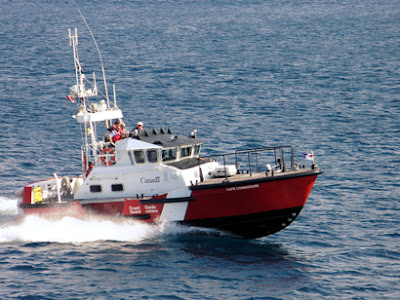 Just what does Steve Harper have against British Columbia?

He's hell bent on ruining our pristine coasts with bitumen supertanker traffic routed through some of the most treacherous waters in the world.   He relies on oil spill recovery vessels that can't operate in bad weather and are only effective on surface spills, useless against a tar product that doesn't float.  He's moved the oil spill action centre from our coast to Quebec.  But now, there's more.

The Harper regime has decided to inflict a little cost-cutting on the Canadian Coast Guard.   He's paring the existing four stations - Victoria, Tofino, Comox and Prince Rupert - down to just two, Victoria and Prince Rupert, north and south or bottom and top if you like.

The one Coast Guard station that isn't in a tsunami zone, Comox, is to be closed by decree of the Prince of Darkness.   That one also happens to be adjacent to the only real Air Force base in British Columbia where all our aerial search and rescue assets are situated.

British Columbians will never need the Coast Guard more than we will when the next tsunami sweeps our coast.   Unfortunately that's when we won't have a Coast Guard.
Posted by The Mound of Sound at 6:20 AM

Its a time consuming task.. but necessary, to identify the related ridings and their current federal MP as well as provincial member and so on down to the very local level. As soon as possible, requests for rationale or validation should be rippled back up the chain to Keith Hadfield, his Ministry and then to the Prime Minster and Cabinet.

If this was part of the overall Conservative election platform or promise is an obvious question.. as is what local Federal candidates may have suggested, promised, misrepresented or lied about during the 2011 election.

Another important question should be the level of 'electoral grooming', fraud, dubious and invasive live and robo calling as well as any instance whatsoever of American electoral services, consultants, volunteers or evangelical ideologists in any of the related ridings.

What agency will monitor or inspect existing, still to be installed or required navigational aids, to meet or exceed International and Canadian shipping/navigation and safety standards?

The decision appears ludicrous, derelict and beyond belief.. A government on the record as intent on drastically expanding maritime traffic via some of the largest ships in the world is cutting related coastal rescue, inspection and control to the bone. I suspect both gross incompetence and a sinister malice combined.. with complete ignorance.

I believe this man is the federal MP ..
Not sure you can expect much ...
How he was elected & why .. is a serious question..

Armed with the knowledge that exists today, Charles Darwin may not have written the theory of evolution, Nanaimo-Alberni MP James Lunney told the House of Commons this week.

"Any scientist who declares that the theory of evolution is a fact has already abandoned the foundations of science," Lunney said in the House on Thursday. Given what is known today, he added: "Darwin would be willing to re-examine his assumptions."

The MP raised the issue two weeks after Science and Technology Minister Gary Goodyear, a Christian, sidestepped questions about his belief in evolution.

Nanaimo-Alberni MP James Lunney has made some controversial comments in the House of Commons about Charles Darwin's theory of evolution.

I've given up asking that question as in the end it matters not which it is for the end results are the same.

@ salamander. thanks for reminding me of the idiot who represents my riding, chiropractor "Doctor" J. Lumpy. He's another Born Again moron.

@Kev. Evidence of Harper's malevolence was splashed across the front page of this morning's Times Colonist. Check my post on our Petro-Politbureau.

So how is the Harper Refugee Action! Plan supposed to work without enough Coast Guard to track down and help kick would-be refugees out of the country?

Anon @ 9:30, he's just pretending he doesn't like the refugees, actually they are our "wetbacks" future cheap labor.......just like in the states where all the Republicans are against Mexican undocumented workers, that is until you come and inspect their slaughterhouse and ship the night shift to Oxaca, or arrest and deport their gardener, nanny or renovator.