The Raincoast May Be Getting Wetter 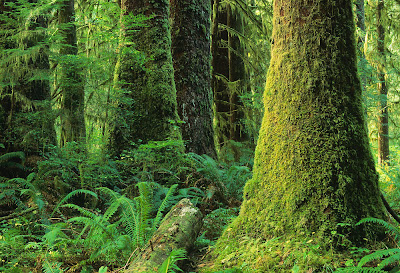 Coastal British Columbia may not be a great place to live if you have problems coping with rain.   We have what I like to call the "Rain Festival" that runs from around mid-October until somewhere between June and July.   Lard, Jaysus and Tunder but it can get wet.  New research is showing that it's probably going to get wetter yet.

"Warmer air allows for more water vapor. So scientists have long predicted that global warming will result in a more intense water cycle—the process by which water evaporates from the oceans, travels through the atmosphere and then falls as rain. Now new measurements of the ocean's salinity prove that prediction—and suggest that global warming strengthens the water cycle even more than anticipated.

"'What we found is that regions that are salty in the main are becoming saltier' and areas that boast more rainfall are getting fresher, explains oceanographer Paul Durack of Lawrence Livermore National Laboratory, who led the research to be published in Science on April 27. 'It's another independent estimate of how the climate is changing as we pump out CO2.'"

What's the best way to cope with what can seem like interminable rainfall?  The internet.  Just go on line and read about all the places that should be getting all that extra rain but aren't.   Read about the people there and what doing without that extra rain does to their lives.  Imagine what they would give to trade places with you.  Just do that and you find you've suddenly got nothing at all to bitch about.

Extending data from 3,500 sensor buoys received over the past decade, "to the millions of historical salinity readings from 1950 to 2000 reveals that, as predicted, evaporation strengthened in drier regions—making the oceans saltier there—and rainfall strengthened in wetter regions—making the surface seawater fresher. In fact, global warming of roughly 0.5 degree Celsius over that span strengthened the water cycle by roughly 4 percent, or around the amount predicted by physicists' equations. "Through a lot of investigation, it provides us with what we would have guessed," Durack says.

But that's not what scientists' computer models predicted. Though various computer models match the actual distribution of saltier and fresher regions quite well, the computer models underestimated the actual rate of water cycle intensification by half. That suggests that impacts on the water cycle of future warming of several degrees Celsius could be substantial, strengthening rainfall and evaporation by as much as 24 percent.

The stronger water cycle will mean stronger rains and intensified droughts over the oceans. And what holds at sea also extends over land, because the oceans cover 71 percent of the globe, hold 97 percent of the world's water, and have already sucked up 90 percent of the extra heat trapped by humanity's greenhouse gas pollution. The increase in warm water vapor as the globe heats will fuel more violent storms, whereas droughts in places like Australia, stuck in the middle of oceanic regions dominated by evaporation, will only grow more severe. Or as Durack says: "wet regions will get wetter and dry regions drier." Given that freshwater availability affects everything from food to energy, this may prove a more difficult challenge for human civilization and natural ecosystems to adapt to than that posed by global warming itself.
Posted by The Mound of Sound at 12:32 PM

Not only that MOS...I am also wrong....didn't put the adjective in the proper place....obvivously had a brain fart. It truly is Lard Tunderin Jesus. The Jesus is always pronounced correctly by Newfoundlanders. Cheers