Climate Change is a Civilization Wrecker 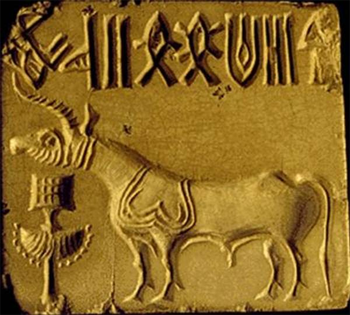 There's been a lot of discussion in recent months about how climate change now setting in might trigger another mass extinction of life on Earth and it might.  Long before that, however, comes the collapse of civilization.

When we think of civilization collapse we tend to think of the Pueblo Indians or the Mayans.  Now we can add several of the earliest civilizations to the list.

The world's first great civilisations appear to have collapsed because of an ancient episode of climate change - according to new research carried out by scientists and archaeologists.

The research, carried out by the University of Cambridge and India's Banaras Hindu University, reveals that a series of droughts lasting some 200 years hit the Indus Valley zone - and was probably responsible for the rapid decline of the great Bronze Age urban civilization of that region.

The findings correlate chronologically with drought evidence found over recent years by other scientists who have examined deposits from the bottom of the Arabian Sea and the Gulf of Oman as well as stalactites from caves in North east India and southern Arabia.

It's now thought likely that the droughts at around that time were partly responsible for the collapse not only of the Indus Valley civilization, but also of the ancient Akkadian Empire, Old Kingdom Egypt and possibly Early Bronze Age civilizations in Greece.

"Archaeologists are really in a unique position when investigating climate change in the past, because we hopefully get to see what people were doing in the 'before, during and after' phases. We therefore get an opportunity to investigate how ancient populations responded to climatic and environmental change. How did they cope with periods of water stress? Were their existing ways of life resilient? Were they forced to adapt in order to survive, and if so, precisely what did they do," said University of Cambridge archaeologist, Dr. Cameron Petrie.

"For the Indus populations, it looks as though living in large groups became untenable, and it was much more sustainable to live in smaller groups. This is of course a huge simplification of a complex process, but this transformation is the underlying dynamic."

We've had it awfully good over the interval back to the start of the Industrial Revolution.  Mankind has enjoyed a mild climate with plenty of precipitation and an absence of  mega-droughts.  It didn't dawn on us in settling the prairie that there was a reason it was grassland supporting a few stunted trees.  We didn't have to because we showed up during a particularly wet period that, being humans, we took for granted and assumed was normal.

I would argue that we have something that permanently prevents civilization collapses that has happened in the past: The printing press.

That allows the spread and preservation of knowledge far greater and any previous technology.

This group is looking for volunteers for a year round blockade, and donations to support the blockade.
I'm still looking into the group, so if anything comes up, I'll let you know.