Australia is somewhat ahead of the global average for climate change temperature rise.  The country just passed the 1C mark.   There's obviously plenty more heat on the way in the future, just as there is everywhere else from existing atmospheric greenhouse gases, not even counting the additional GHGs we'll be adding to the stack over the next decades.

When you're a country that has always prided itself for its "sunburnt beauty" there's not much percentage in going from unbearably hot to unsurvivably hot.

The 1C milestone was the focus of  a report released today by Australia's national science agency, Commonwealth Scientific and Industrial Research Organisation (CSIRO), and its Bureau of Meteorology.

The duration and intensity of heatwaves and days above 40C continued to increase, and temperatures were projected to increase with more hot days and fewer cold days, he said.

With continued drying in parts of the southern half of Australia, droughts were projected to increase.

"With such trends I would expect to see a reverse in migration across the Tasman, with increasing numbers of Australians coming to New Zealand," he said.

"This is as the climate of continental Australia becomes very harsh."

And a tip of the hat to Australian Green party senator, Scott Ludlam, for delivering this slightly scathing assessment of Aussie denialist prime minister, Tony Abbott.

“Just as the reign of the dinosaurs was cut short to their great surprise, it may be that the Abbott government will appear as nothing more than a thin, greasy layer in the core sample of future political scientists drilling back into the early years of the 21st century.” 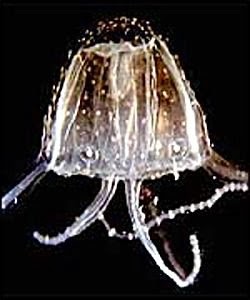 In other fun climate change news for Australians, the CSIRO reports that warming waters are expected to trigger massive increases in the numbers of lethal jellyfish.

"What you don't want happening is that all of a sudden it's a huge problem and no one sees that coming," she said.

Symptoms of an irukandji jellyfish sting include severe pain, vomiting, anxiety and in rare cases can cause pulmonary oedema (fluid in the lungs), hypertension or toxic heart failure that can be fatal.
A box jellyfish sting can be fatal in as little as three minutes.

Just think of all the Americans who may want to move to Canada when the US reaches its saturation point from drought. With it wanting to change our system making it the same as back home. Anyong

A lot of us have had anxious moments thinking about just that, Anyong. A combination of severe droughts in the south and sea level rise will leave America with a significant IDP or internally displace persons problem. There will be pressure on Canada to take some of that load.