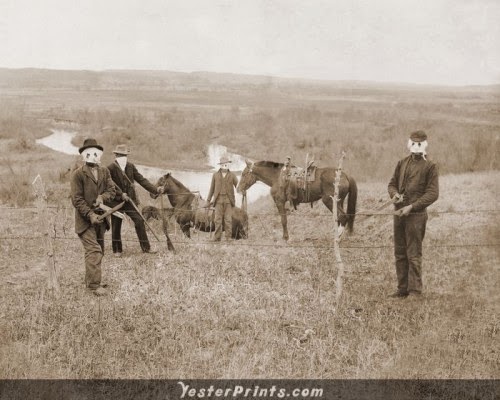 It's a classic theme of the 'wild west' - range wars where free-range cattle ranchers clashed with farmers whose fenced fields blocked their way.  Today it's a struggle between farmers and frackers and this time the struggle is over water, more specifically who gets it and who goes without.

This has been going on in Texas for some time and, generally, it's the frackers who win.  Now the same thing has flared up in drought-stricken California, especially in the rich agricultural area of the Monterey Basin beneath which lies an awful lot of fossil fuel just waiting to be fracked.


Despite several polls indicating that a majority of California residents are opposed to the “water-intensive extreme oil and gas extraction process” known as hydraulic fracturing, or fracking, the state’s Democratic Gov. Jerry Brown has continued to pledge his support for pro-fracking legislation.
As Brown gets closer to signing a piece of legislation that would allow for the expansion of fracking and other controversial forms of oil extraction in California’s Monterey Shale formation, located beneath California’s “most prized” farmland, opponents have boosted their work to ban fracking in the state.
On this one, Jerry Brown is dead wrong.  Those oil and gas reserves have been securely sequestered underground for millions of years.  They're not going anywhere.  They'll still be right where they sit when the drought ends.  It's the farmers who have long contributed to California's prosperity that are at mortal risk if they're not given priority access over frackers to the limited water supply.
Posted by The Mound of Sound at 9:24 AM