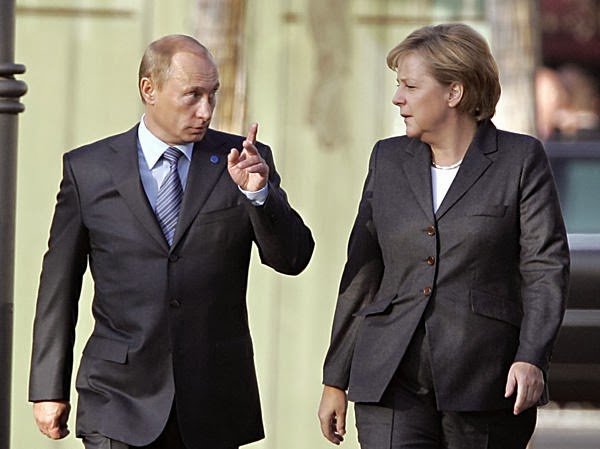 Now this is worrisome.  It is a transcript compiled from verbatim notes of a meeting between Russia's Vlad Putin and German chancellor Angela Merkel that led Merkel to conclude her Russian counterpart is not in touch with reality but is living "in another world."

Putin squirmed and rambled. And rambled and rambled. He was a rainbow of emotion: Serious! angry! bemused! flustered! confused! So confused. Victor Yanukovich is still the acting president of Ukraine, but he can't talk to Ukraine because Ukraine has no president. Ukraine needs elections, but you can't have elections because there is already a president. And no elections will be valid given that there is terrorism in the streets of Ukraine. And how are you going to let just anyone run for president? What if some nationalist punk just pops out like a jack-in-the-box? An anti-Semite? Look at how peaceful the Crimea is, probably thanks to those guys with guns holding it down. Who are they, by the way? Speaking of instability, did you know that the mayor of Dniepropetrovsk is a thief? He cheated "our oligarch, [Chelsea owner Roman] Abramovich" of millions. Just pocketed them! Yanukovich has no political future, I've told him that. He didn't fulfill his obligations as leader of the country. I've told him that. Mr. Putin, what mistakes did Yanukovich make as president? You know, I can't answer that. Not because I don't know the answer, but because it just wouldn't be right of me to say. Did you know they burned someone alive in Kiev? Just like that? Is that what you call a manifestation of democracy? Mr. Putin, what about the snipers in Kiev who were firing on civilians? Who gave them orders to shoot? Those were provocateurs. Didn't you read the reports? They were open source reports. So I don't know what happened there. It's unclear. But did you see the bullets piercing the shields of the Berkut [special police]. That was obvious. As for who gave the order to shoot, I don't know. Yanukovich didn't give that order. He told me. I only know what Yanukovich told me. And I told him, don't do it. You'll bring chaos to your city. And he did it, and they toppled him. Look at that bacchanalia. The American political technologists they did their work well. And this isn't the first time they've done this in Ukraine, no. Sometimes, I get the feeling that these people...these people in America. They are sitting there, in their laboratory, and doing experiments, like on rats. You're not listening to me. I've already said, that yesterday, I met with three colleagues. Colleagues, you're not listening. It's not that Yanukovich said he's not going to sign the agreement with Europe. What he said was that, based on the content of the agreement, having examined it, he did not like it. We have problems. We have a lot of problems in Russia. But they're not as bad as in Ukraine. The Secretary of State. Well. The Secretary of State is not the ultimate authority, is he?

And so on, for about an hour. And much of that, by the way, is direct quotes.

Gone was the old Putin, the one who loves these kinds of press events. He'd come a long way from the painfully awkward gray FSB officer on Larry King, a year into his tenure. He had grown to become the master of public speaking, who had turned his churlish, prison-inflected slang to his benefit. A salty guy in utter command of a crowd. That Putin was not the Putin we saw today. Today's Putin was nervous, angry, cornered, and paranoid, periodically illuminated by flashes of his own righteousness. Here was an authoritarian dancing uncomfortably in his new dictator shoes, squirming in his throne.

For the last few years, it has become something like conventional knowledge in Moscow journalistic circles that Putin was no longer getting good information, that he was surrounded by yes-men who created for him a parallel informational universe. "They're beginning to believe their own propaganda," Gleb Pavlovsky told me when I was in Moscow in December. Pavlovsky had been a close advisor to the early Putin, helping him win his first presidential election in 2000. (When, in 2011, Putin decided to return for a third term as president, Pavlovsky declared the old Putin dead.) And still, it wasn't fully vetted information. We were like astronomers, studying refractions of light that reached us from great distances, and used them to draw our conclusions.

If Putin has lost it, if he's working, under great stress, inside an information bubble created by sycophants, he becomes unpredictable.  Assumptions that, when the hard decisions must be taken, he will act rationally are hard, perhaps even dangerous to rely upon.

Perhaps sensing the risks of inadvertently triggering unwanted results, a rift is opening between the U.S. and Europe over American proposals to 'isolate' Russia through economic sanctions.

With the Americans, supported by parts of eastern Europe and Sweden, pushing for punitive measures against Moscow, EU foreign ministers divided into hawks and doves, preferring instead to pursue mediation and monitoring of the situation in Ukraine and to resist a strong sanctions package against Russia.

It is far easier and much less consequential for Washington to slap sanctions on Russia than for the Europeans to play the same game.  The United States is relatively immune to retaliation from Moscow which is not the case for Europe.

Email ThisBlogThis!Share to TwitterShare to FacebookShare to Pinterest
Labels: Merkel, out of touch with reality, paranoia, Putin

An eerie similarity, perhaps, between Putin and the current generation of Tea Party leaders in the US, who also fervently believe their propaganda?

... OK, the similarity ends there. At least the Tea Party crew does not have control of a vast nuclear arsenal.

Mound, you have written very interesting posts on Putin. It looks in his third term, as president, he has gone crazy.

He spent $51 billion to host winter Olympics. It looks his superego was driving force behind it so that whole world can see him in all his glory - $51 billion photo-op. (Harper spent $2 billion on G8 and G20 for similar reasons)

Where is it leading to? Is it possible that this egotistical maniac can start a major war that world does not need? It may lead to an incredible destruction. Do you think he is headed in that direction? German chancellor's description does reveal that he is gone crazy
.

I've been getting my information from The Vineyard of the Saker: http://vineyardsaker.blogspot.se/

He's of the opinion Russia itself is furious over the USA's meddling in the Ukraine. The Russian parliament has voted to give Putin the right to use armed force in Ukraine.

I don't think Putin is in some other world. He's squarely in the Russian world, which is mouth frothing mad over the USA meddling in Ukraine.

I'm of the opinion the western world is underestimating just how angry Russia is. Putin is merely reflecting this mood.

It looks like that this is beginning of the end of Putin.
The ego and vanity finished many clever rulers before.
A..non

It could be weeks before we have a reliable idea of who Putin has become and his state of mind. I think we underestimate him at our peril.

The Agonist has clarified what Merkel said: "Putin has a totally different world view than we do".
http://agonist.org/quax-gets-results/

markfromireland's comment on Ian Welsh' blog is "Merkel is unhappy with being used in this way".
http://www.ianwelsh.net/consequences-for-russia-over-the-ukraine/#comment-57972

The US probably needs to back off from the EU, or else risk pushing it further toward Russia. This whole episode is face meeting palm worthy.