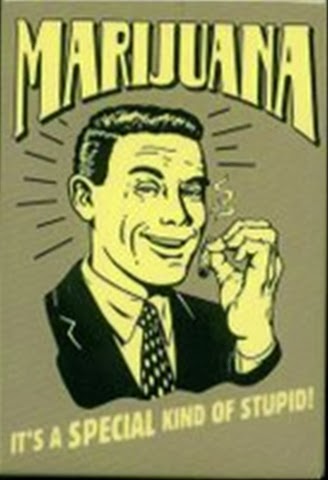 Hey, hey - whatever happened to Harper's Reefer Madness?  Word from Elmer's unfortunate boy, Peter MacKay, is that the Harper regime is looking to backpeddle on its get tough on drugs policy.  Perhaps running scared from Justin Trudeau, the Tories want to make simple pot possession a ticket offence instead of a full-blown Criminal Code matter.

Justice Minister Peter MacKay told reporters on Parliament Hill Wednesday morning he has tasked the justice department "with looking at and coming forward with what could be a draft legislation."

"We have not arrived on the exact mechanism in which that could be done. The prime minister has signalled an openness to this," he said.

However, MacKay is making it clear that this is not decriminalization or legalization of marijuana, but "giving police further discretion" when it comes small amounts of pot.

"The Criminal Code offences would still be available to police, but we would look at options that would give police the ability, much like the treatment of open liquor, that would allow police to ticket those types of offences," he said.

Hmm.  I wonder if senators will be able to expense those Zig-Zag rolling papers?

This "ticketing" pot idea is completely meaningless ostensibly, although the 'running scared' theory is likely behind it. With the soon-to-come busting of medical pot suppliers and mandatory minimum sentencing, Harper nets a big fat negative for popularity points. Not only are these measures begrudging, thinly veiled and punishing, they are probably headed for court to be tested Constitutionally: already MMSs are getting cases dismissed when six months in prison is judged cruel and unusual punishment; again by the Constitution, restricting access to medical marijuana has already been failed (disallowing homegrown and forcing patients to purchase from licensed, government contractors is the reaction to that Constitutional failure); in BC, many totally unfair civil forfeitures are precipitated by homegrown pot and look to be ready to initiate class action lawsuits from victims. Harper cannot win on this file.

.. What to expect from greasy hogs,
splattered n happy in their own shite ??

This is a distant, remote, unconnected, failed and flailing government.. with no real mandate, zero ethics or morality .. cowards, without courage, shrilly proclaiming a bizarre authority .. and pretending to be speaking for Canadians ..

Butt really nailed it for any Canadian with a brain..
representing the Harper Brand perfectly..
and the Harper Government Party Values..
and Van Loan put lipstick on the steaming pile

And to show their awareness and concern.. and gratitude.. they sent one cent to the mother of a Canadian soldier
One stinkin penny..
for a young man who served all of us

No senior officer with flowers, or a medal
or heartfelt condolences .. or a giant tearful shared hug
Nope.. a cheque for one stinkin cent

you pieces of shit ...
you deserve your septic tank legacy ..

Junior Trudeau must have gained more traction on the issue than I thought. His majesty Harper "signals openness" and indicates so through one of his courtiers. Well la de da isn't that grand!

This only further illustrates the legislative schizophrenia of the Conservatives. The worst possible thing they could do is decriminalize possession of small amounts and yet leave growing/distributing a criminal offense. That will only encourage organized crime while punishing mainly end users.

And giving cops a new ticket to write when they find someone with a few joints will make life swell for government, they've created a new source of income! Trouble is it will probably still mess people up trying to cross the US border. Up to now police were turning a blind eye to casual users because they calculated little benefit in prosecuting otherwise law-abiding people under the criminal code. However writing a ticket is painless to the system but will catch thousands of people who were otherwise would not be dealt with under law.

The way forward is legalization. Just please don't smoke the stuff where I can smell it. It is called skunk for a reason.

werent these clowns going all crazy to besmirch JT For his stance on decriminalization. Oh boy, they need a flipflop logo of some sort to rebrand what they stand for.

@ scotty - this is the first step in a move to legalize recreational sale and possession. If anyone was going to hold the line it was the Tories. Forfeiture of grow ops is only justified because it is the preserve of a criminal element. Eliminate the criminality, you lose the criminals and there's no need for forfeiture. I'm pretty sure that won't be too far in the offing.

@ Elliott - legislative schizophrenia? All reactionary governments eventually descend to the point where they do contradictory things that lack coherence. Harper's BFF Tom Flanagan has long said that SHPM has no vision and no interest in vision. That's why he's so manipulative and erratic.

@ Deb - 'rebrand'? That implies they had a brand to begin with.

the brand was rightwing sliding towards fascism...but this last year its ....well ...now its off the charts crazy.

The Cons are back with another bill to make warrant less snooping legal. Sign the open media petition.