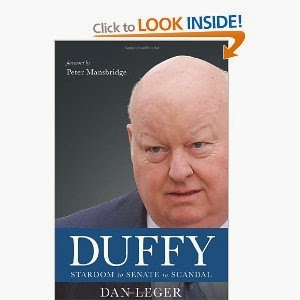 We won't have long to wait for the release of the tell-all book on Mike Duffy, penned by his old journalism colleague, Dan Leger.

The book, Duffy: Stardom to Senate to Scandal,  is said to revisit the good old days when Leger met Duffy in Ottawa (1984-1990) and traces Duffy's television career, his pursuit of a seat in the Senate and the scandal that brought him down and continues to plague Stephen Harper.

According to Leger, he and Duffy spent hours on the deck of the senator's Cavendish cottage as Duffy spilled the beans.  Duffy maintained, as he always has, that he was set up by Harper and the prime minister's office.  Leger writes:

Over time, the links to the prime minister’s office became much more clear and the RCMP’s case against Duffy and the other senators came to light. Prime Minister Stephen Harper himself came into the critical spotlight. It also became obvious that Duffy and the others were being well and truly thrown under the bus by their former Conservative friends.

That’s why this is not just a story about misbehaving senators. The Duffy-Senate affair spilled across the weeks and months and into the central machinery of government. Nigel Wright’s involvement put the PMO at the centre of the scandal. Harper himself was reduced to talking points.
Friends of Ol' Duff are less than happy that the beleaguered senator spoke so freely to Leger.  They fear Duffy may have given too much away too early.

Duffy's final speech in the Senate spilled the beans too. It will be hard for Harper to push this one under the rug. Duffy's speech implied that Harper was fully aware of Write and the exchange $90 thousands.

just when I thought their might not be a book. it is a tad early for the book though. Timing, being everything, they ought to have waited another 6 months. Now there is no reason to not go ahead with a prosecution, or it maybe Duffy was told the case is going forward and he has nothing to loose. But if he wants to sink Harper, he ought to have waited until closer to election time. Or maybe Duffy thinks the election is sooner than later. Oh, well, lets buy the book and see. Perhaps it will be as good as Stevie Cameron's was on Mulroney, "On the Take".

To say the least, Mound, I avidly await the book's release.

I wouldn't be too optimistic that the book will lay bare Harper's perfidy, e.a.f. At the time the Cavendish Cottager was talking to Leger, Duffy still clung to a delusion that Harper would ride to his rescue. I also get the sense that Leger's narrative won't be entirely journalistic. He might be looking to settle scores. Hard to tell.

Still, I'll be getting my hands on a copy ASAP.