Devil's Advocate - An Idaho Professor Asks, "When May I Shoot a Student?" 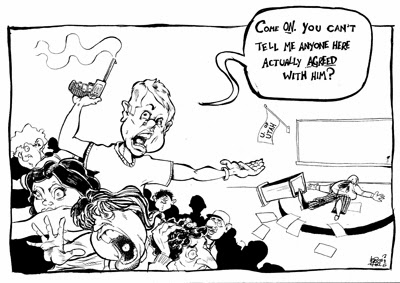 Biology and criminal justice.  Oh well, Boise State University prof. Greg Hampikian does seem to have the bases covered.  The New York Times has published the professor's open letter to the chief counsel of the Idaho State Legislature asking, "when may I shoot a student?"


Dr. Hampikian was moved to write from confusion over his state's new law allowing students and faculty to pack heat on campus.  He writes:


I have had encounters with disgruntled students over the years, some of whom seemed quite upset, but I always assumed that when they reached into their backpacks they were going for a pencil. Since I carry a pen to lecture, I did not feel outgunned; and because there are no working sharpeners in the lecture hall, the most they could get off is a single point. But now that we’ll all be packing heat, I would like legal instruction in the rules of classroom engagement.
At present, the harshest penalty available here at Boise State is expulsion, used only for the most heinous crimes, like cheating on Scantron exams. But now that lethal force is an option, I need to know which infractions may be treated as de facto capital crimes.
I assume that if a student shoots first, I am allowed to empty my clip; but given the velocity of firearms, and my aging reflexes, I’d like to be proactive. For example, if I am working out a long equation on the board and several students try to correct me using their laser sights, am I allowed to fire a warning shot?

If two armed students are arguing over who should be served next at the coffee bar and I sense escalating hostility, should I aim for the legs and remind them of the campus Shared-Values Statement (which reads, in part, “Boise State strives to provide a culture of civility and success where all feel safe and free from discrimination, harassment, threats or intimidation”)?

Knee-jerk reactions from law enforcement officials and university presidents are best set aside. Ignore, for example, the lame argument that some drunken frat boys will fire their weapons in violation of best practices. This view is based on stereotypical depictions of drunken frat boys, a group whose dignity no one seems willing to defend.

The problem, of course, is not that drunken frat boys will be armed; it is that they are drunken frat boys. Arming them is clearly not the issue. They would cause damage with or without guns. I would point out that urinating against a building or firing a few rounds into a sorority house are both violations of the same honor code.


Some of my colleagues are concerned that you are encouraging firearms within a densely packed concentration of young people who are away from home for the first time, and are coincidentally the age associated with alcohol and drug experimentation, and the commission of felonies.
Once again, this reflects outdated thinking about students. My current students have grown up learning responsible weapon use through virtual training available on the Xbox and PlayStation. Far from being enamored of violence, many studies have shown, they are numb to it.

The biggest war for the US is Americans against Americans. 12000 Americans are killed every year mostly by gun shots. In a single year there are more than double the total causalities compared to the Afghanistan and Iraq wars.

You see, LD, all that carnage is because not enough Americans carry guns. The solution is obvious - free guns for everyone.

Mound,apparently you're very familiar with the gun lobby.:)

Why, yes, LD. They're among my closest friends.